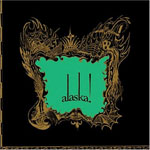 To review this record, I crack open the 16 oz. "Natural ICE" beer that was in the fridge when we moved into this apartment. My wife bounces her ass to this mockingly across from me in the living room, in her shredded red sweatpants. "That beer smells awful," she says, "it's piss beer."

But I drink my way with through this forlorn bar rock, played by a bassist from Sebadoh (Russ Pollard), a lead singer-guitarist dude that toured with Folk Implosion (Imaad Wasif), and drummer Lesley Ishino from the Red Aunts. All musical veterans, fizzy hangover rock sweating out their pores, dribbling in the chaos and jamming out more and more.

Wasif is one of those guys who writes cryptically poetic kinds of songs, and sings them as if they're high drama ("Surrender"). Maybe a little too much Doors growing up. He is very fortunate to have a crisp, fluid ("crisp, fluid" — gotta ban those descriptions soon, for sure) rhythm section, that can bounce and clip along with him no matter where his tormented emotional state might lead him . "Marry me!" he croons in the aforementioned song, and it actually sounds kind of spot-on. "Let's start it all, let's start it all over again." Actually, this is pretty affecting.

The emotional and historical confessional tone ("Through the Years") demands that I not take this stuff too lightly, it's deadly serious, and I know how Wasif feels — rock and roll is about loading gear, losing lovers, losing years. But when he sings, "You were a young gun." I'm thinking maybe one of us should have gotten out of the clubs a lot sooner.