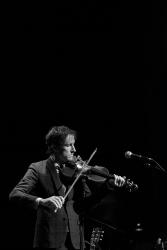 All blissed out with Andrew Bird on a Monday night

I'm sure a lot of people could say this about a number of their top artists, but there really is nothing like getting to see Andrew Bird live.

That being said, I reserve the right to use that sentence again next week, about a different performance. But I digress.

To be honest, I was a little wary heading into the Moore Monday night for the show. Wary of the intimacy factor at a big venue for a performer like Andrew Bird, wary of seeing him play with a backing band, and wary of having to stand in people's faces to get decent photos in the beginning of the set. I'm happy to report that I was wrong on all counts: the show was utter bliss, the supporting musicians in his band provided perfect accompaniment (and were fantastic in their own right), and thanks to fellow imaginary girl Laura I was able to navigate the front of the house with ease. This performance was easily the best I've seen this year — and even though I took things down a notch in February, I say that having seen over thirty bands so far in 2009.

While I'm not exuding ache and moonbeams out of my pores for the latest album, I have to admit — Noble Beast is good. Andrew Bird's work is always good. Between his lyrical genius, technical talent, innovative style, and overall kind-and-gentle-slash-scary-smart-mad-scientist vibe, he's hit it out of the park every single time I've seen him play. He tunes into this frequency that only he can hear, and that we can only hear in his presence, and then feels around for a good vein to push it all into our proverbial mainlines at exactly the right moment. Even from the balcony, he was huge, and ethereal, and amazing in a way that nobody else is amazing.

I dug up a lot more adjective last night about the technicalities of the set, and the big bodied guitar awash in pink stagelights, and all of those moments when he went from violin to said guitar slung around his back and then to violin again with flawless timing, and all the looping, and how it was so good that I almost bit right through my camera strap — but the internets ate about an hour of my life (and the subsequent writeup that resulted).

So, here's some words that work, that I can probably remember if the evil electronic boll weevils that inhabit the tubes decide to strike again: the show was fucking fantastic. Noble Beast is a great album, and it's wonderful that Andrew Bird is finally getting his due with a larger fanbase. The last third of the show was a nice cross-section of choices from The Mysterious Production of Eggs, Weather Systems, and Armchair Apocrypha (which is about when the strap-biting part happened). I was bursting at the seams afterward as we spilled onto the sidewalk, at the sheer glee of it all, elation embedded in my bones.

I took some pictures, and Laura did too. And Lonely, Dear provided semi-orchestral, Frightened Rabbit-esque, well-matched opening support. And we all lived imaginarily ever after.