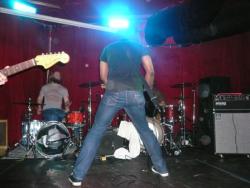 The Dirtbombs: All I Ever Wanna Be Is Your Ever Lovin FAN

There are some shows you wait all year for with the anticipation of a child at Christmas.  The Dirtbombs put on that show. Their unique hybrid of Detroit soul and garage punk is no bullshit, in your face and dutifully pays homage to the holy trinity of fast cars, foxy ladies, and rock and roll. They are not a light touch; it’s a “Wham, bam, thank you Ma’am” affair. The band is singular in its purpose to cram as many hard rocking jams into the set as humanly possible.

Never a man for pillow talk, lead singer Mick Collins typically bookends his shows with “Good evening, (insert name of town), let’s dance,” and “Thank you, good night,” and little else. Touring on the Alan Moore "Leopardman at C&A"- themed We Have You Surrounded, this show was no exception. With new bassist Zachary Wheedon in tow, Collins and company played a slick, streamlined show, complete with a surprise floorshow ending.

Many concert-goers have little to no interest in listening one opening band, much less two. For this particular show, missing the opening bands would have been a huge mistake. As a matter of fact, I think I have discovered my new favorite local band in Thee Emergency, a supercharged, sexy garage blues band led by Zana "Dita Vox" Geddes. Thee Emergency are a perfect pairing to the Dirtbombs. The crowd was non-committal to begin with, but Geddes eventually won them over with her powerful delivery and complete ownership of the stage. Her vocals and lyrics are Southern Comfort sweet and razor sharp, comparable to those of Beth Ditto of the Gossip or Rachel Nagy of The Detroit Cobras. She and the band appeared to be completely at home on stage, playing off of each other with the comfort and confidence of people who genuinely enjoy making music together.

The second act, Detroit born and Portland-based Little Claw, though excellent, were misplaced as the second act. Their droney, fuzzed-out, Sonic Youth sound felt out of sync sandwiched between two groups with such similar stylistic tendencies. There was a palpable lull in the energy of the crowd. Despite the high quality of music being played, one got the overwhelming sensation that they were merely politely listened to.

Lead singer Kilynn Lunsford was coy but skilled, deftly switching guitar for a purple violin that would make Prince squeal with jealousy. Looks can be deceiving- despite her diminutive presence, her vocals were focused, fierce, and intense.  Her voice has a similar quality to those of Corin Tucker of Sleater Kinney or Anna DeSilva of The Raincoats, and the combination of double drums and guitars made them compelling to watch.

By the end of the second act, feet started to shuffle and watches were repeatedly checked. If one wasn’t savy, they might have missed the unassuming Mick Collins and his trusty toolbox and thick-lensed glasses meticulously taping down his gear. He has a Jekyll and Hyde duplicity to him- though you might not notice him going about his work pre-show, there is no doubt as to who he is at showtime. When the requisite shades go on, the crowd goes off!

With a bit of Family Von Trapp flair, each member took the stage separately, picked up an instrument and began to play, one after another until Collins finally joined them. The crowd was greeted then assaulted with a blistering set of fan favorites, with no stage banter, no song introduction, and little more than a thank you at the end.

The band peeled off the stage the way it entered, Collins leading, followed by bassist (and lead singer of the Knockouts) Ko Melina, new bassist Zachary Wheedon, but not before drummers Ben Blackwell and Pat Pantano (formerly of the Come Ons) treated the crowd to a drum battle, complete with Blackwell bringing part of his drum kit down into the crowd and bashing it to pieces.

On the whole, their set was tight and superb as always, but lacked its usual teeth. Wheedon held his own and will make an ideal replacement for Troy Gregory. He appeared to be very familiar with the discography and often looked amused by the enthusiasm of the crowd. The usually animated Ko Melina, looked disconnected and appeared to suffer through to the end.Though her attention to her task never wavered, her thousand yard stare spoke volumes. Mick Collins too seemed distracted, despite his trademark playing behind his head and magnificent Diamond Dave guitar kicks.

Perhaps it was road fatigue, perhaps he was responding to the crowd’s energy, which after two opening bands had waned considerably. Pantano and Blackwell are consummate showmen, and picked up the slight droop in the sails with their infectious energy and playful rapport. The set list was a well-chosen mix of high-energy tracks from We Have You Surrounded, and at least one from every album they have produced to date. By the end, neither the crowd nor the band could chicken head through one more song, and parted company satisfied, and exhausted. In the two days following, my ears continued to sound the knell heralding my inevitable deafness. If the last thing I ever hear is Mick Collins growl the words “Let’s dance, Seattle,” I can’t say it would be a tragedy.

Can’t Stop Thinking About It

Ode to a Black Man

Get It While You Can

Theme From the Dirtbombs

It’s Not Fun Till They See You Cry