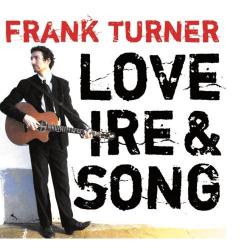 From the embers of a London, UK based punk band called Million Dead comes Frank Turner, who has since gone on to embrace an acoustic guitar and create folk music in the style of something akin to a poppy Billy Bragg. Love Ire & Song is his second solo album, arriving just one year after his debut Sleep is for the Week, and by listening to it you would have no idea that he was ever involved in a hardcore punk group.

The acoustic led melodies are mostly upbeat and Turner shouts his way enthusiastically through most of the songs. If you are familiar with The Levellers, who were quite popular in the UK in the 1990s, his sound is not that dissimilar to theirs. "Substitute" is based in a minor key and the strumming is reminiscent of latter day Johnny Cash. "Better Half" is slower and has a pretty melody. It provides a good change of pace to the majority of the upbeat material, which often resembles a toned down and unplugged Bad Religion.

Love Ire & Song is for those who like to sing along while listening alone. Clearly songwriting was his calling. The songs are provocative and the melodies are attractive. This is a release that should sit well with hipsters and anti-hipsters.

(Also worth mentioning is that his UK record label, Xtra Mile Recordings, has just released a compilation CD by Frank Turner titled The First Three Years that is available exclusively through their website at www.xtramilerecordings.com.)