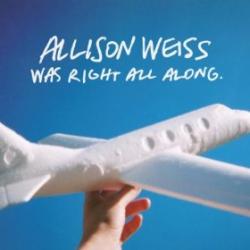 Allison Weiss Was Right All Along

One of my very favorite rock fanzines Roctober is quoted in Allison Weiss’ hand-made, zine-like press kit as saying she should change her first name to “Adorable.” I can’t really say it any better than Jake Austin, who can spot sweet talent when he sees it.

Yes, I’ve been sucked in, too. The scrappy, bespectacled little gal in a cheap vintage dress moved to Athens in 2005 and ended up playing festivals like Athfest and Atlanta’s 500 Song for Kids benefit, while relying on Internet friend-fan support to put out this, the most recent of her six records (!). (Love how she gets her name into the title of Was Right All Along, too; something Woody Allen should have done long ago with one of his films.)

If you’re thinking that this all throws up some “too twee as hell” red hipster bandana flags, you’d be right. If you liked the geek chic flick Paper Heart you’re going to love this CD. Thing is, I’m just a sucker for a vulnerable young confessor with terse wordplay, and she’s not one-dimensional in her adorability. Her work is based in the strength of a young woman who can write kick ass pop rock songs like “Fingers Crossed” and “You + Me + Alcohol,” two of about eight great songs here. They combine the grit-and-sleekness of 90s indie rock with the raw imagery of spontaneously tearing up from unexpectedly torn hearts and staring down at your wine-stained scrunch boots, things said that were even worse than things done before lovers drank themselves to black-out states.

There are a lot of records that want to be Allison Weiss Was Right All Along, but that’s not why it’s good. It’s good because it’s there for you, like the friend you call as you’re heading into a liquor-fueled hot mess. And for the churlish lo-fi cult she may be too sweet and accessible (don’t expect experiments in easy listening black metal) and for the Lady GaGa crowd she’s who they step on in line to get their Grey Goose at the bar. There’s a restrained crunch and bite to “Fingers Crossed” (guess what I’m suggesting be the single?) and elsewhere, blunt unironic lead guitar working perfectly with her acoustic bomp. A crackly warmth deep inside all ten of these tracks which just makes the lack of flash all the better for it. Yeah, you got another convert, you sweet-voiced shimmy-shyster you, Ms. Weiss.