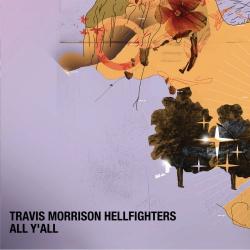 You have to feel kind of bad for Travis Morrison. In a sense, he embodies what happens when the lead singer of well-loved modern rock band (in this case, the Dismemberment Plan) strikes out on his own and more or less takes the phrase “strikes out” a little too literally. His career is a contrast to the likes of Stephen Malkmus, whose solo career has been a success (so far), but poor Travis, he started on the wrong foot with Travistan, an abomination unto music. Well, this time around he’s brought the Hellfighters with him to help out and produced All Y’All, an album that doesn’t really make up for his previous crimes, but it also doesn’t kill everything it touches.

It's hard to pinpoint exactly what's so disappointing about Travis Morrison's solo career. Nothing he has produced has been as captivating as the Dismemberment Plan, nothing has really grabbed ahold like “You are Invited” or “The Ice of Boston.” Maybe those songs were just well-suited for the times we existed, but alas, those days are gone. Instead, upon listening to All Y’All we’re greeted with tracks like “I’m Not Supposed to Like You (But),” which isn’t entirely bad but gets a full letter grade docked for the ridiculous title. It also loses a few points for the bongos in the background that make it sound like Travis is performing with a bunch of hippies at an outdoor festival in Oregon.

Other messes include “Catch Up,” which I thought was Travis’ attempt to jump on the Postal Service bandwagon until suddenly a rapper jumped out from behind a bush and I wondered if Travis thinks he’s in Islands all of a sudden. Ten points for creativity but minus several thousand for the follow through.

Travis’ lyrics don’t lend much to behold either, especially when he offers up gems like "I need you badly/I need you bad/cuz you’re the best thing I ever had" on “I Do.” You’d think Travis should seriously considering taking up writing lyrics for Britney and Avril at this pace. “You Make Me Feel Like a Freak” is a little more straight-forward, but also feels as hollow as one of those vending machine gumballs (and about as flavorful).

Travis does earn back some points with “As We Proceed,” a solidly catchy modern rock song (however, still poisoned by bongos). Sure, Travis uses phrases like "nerdy ass" but the song at least has a pulse as it oscillates back and forth from a darker verse and pop-ridden chorus. “Hawkins’ Rock” has a little more life to it, also, with a driving guitar line that sort of capture but still, Travis’ lyrics just, well, suck: "then we’ll go looking for fun now/driving down I-81 now." Indeed, he rhymes “now” with “now.” The album does end on a high note, though, on “Saturday Night,” a dark and sinister piece with handclaps and growling guitars that builds into a rolling chorus. Just listening to it makes me wonder why Travis doesn’t record more songs like this.

This year’s Dismemberment Plan reunion tour was well received and really, at this point I might suggest to Travis to reconcile with the Plan and get back on that track. All Y’All just comes across as a bit of a sophomoric mess that doesn’t know which way is up. Somewhere in there, I’m sure there are some good songs, but until Travis can get a handle on where he’s going with all this (and maybe a thesaurus could help to0), we can all sit back and think of the good ol’ days.