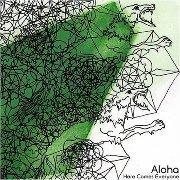 The Aloha – a delicious breakfast cocktail of champagne and pineapple juice

Aloha's last two full-lengths – 2000's That's Your Fire and 2002's Sugar – were fantastic explorations into the unwritten rules of rock and roll; they were fantastic revelations of what vibraphone and xylophone can accomplish within the realm of progressive-progressive, post-post-modernist rock. Listening to Aloha is an unexpectation, a surprise party on a day that isn't even your birthday; not only do they play wonderful rock music – and what, if not that, are we usually scanning record shelves for? – but they play beautiful music that is at once accessible and inaccessible, rock but also jazz, indie but also underground. In 2001, when I first saw them at a club in Richmond, I went expecting a mimosa, but got an Aloha instead.

Here Comes Everyone is Aloha's third full-length. It was released on Polyvinyl Records in 2004, and is easily one of the best records ever put out by a Midwestern that's also brought us releases from such great bands as Of Montreal, Mates of State, Rainer Maria, 31 Knots, and even the only American Football record.

Somewhere in the middle of the country, a mostly unknown band has been making records that rival the alphabet in terms of beauty and applicability.* Songs like "Ferocious Love" and "A Hundred Stories" on That's Your Fire and "They See Rocks" on Sugar have a pop sensibility about them that simply makes sense. One wants to think, "Why is there a vibraphone AND a xylophone on this song?" and then realizes that, well, it just sounds right that way. "Here Comes Everyone" – to put it in words that (hopefully) "simply make sense" – is a record that is just right.

The band hails simultaneously from New York, Ohio, D.C., and elsewhere; they formed in 1997 when guitarist/vocalist Tony Cavallario and bassist Matthew Genglar joined with Eric Koltnow and Anthony Buehrer, toting a vibraphone across the country, and eventually having Cale Parks step in on the drums. Recently, TJ Lipple replaced Koltnow. According to the liner notes, Lipple is heard playing "samplers, mellotron, drumming, keyboards, vibraphone, marimba."

And oh wow; what songs –

The first track is "All the Wars": a shattering of drums that are then joined by rubbery guitar arrives suddenly, as Aloha does away with any sort of intro and jumps straight into one of the biggest songs on the record. One of the best lyrics appears in this track; "We're alive thanks to a light shone in the night that found an airship in its sights. In the crossfire your grandfather cried to your mother."

Following, is "You've Escaped," in a much quieter form than it was as the b-side to a seven-inch, which also featured the single "Boys in the Bathtub" (appearing on Here Comes Everyone as well). This is the current single, and recently the show-closer at two appearance in New York this fall.

As the record progresses, so does momentum. Even in the slower, balladic songs – "Be Near" and "Perry Como Gold" – immersion into the brilliance of this record is deep and pleasurable. The waltzing "Thermostat" left me breathless on my first listen; the delayed entrance of jazz-ed piano and drums on the first lyric of "Be Near" ("Can we be near? Our hands across the table. Everything in pairs. On the run, we aim for the summits and pinnacles.")

Here Comes Everyone is the record you listen to and say, "Why is this band not huge?" You play it for your friends and they say, "Wow, this is great." You see them live and feel goosebumps erect themselves the entirety of a one hour set, where the music never stopped, but your obsession with the Talking Heads has found a new home. Enjoy this record; records like this don't come around often.**

Notes to the text:

* The strivation which defines music journalism is to reach an objective point-of-view. I, full of excessive shame, must admit that as I write this I am excessively drunk. It's a Wednesday night, and I have a lot of "important" work to do tomorrow morning. In an effort to make typing easier, I've already had two glasses of water and have eaten a turkey sandwich. Now I will take a shower to try even harder. Such is the love I have for this record.

** Three Imaginary Girls rates on a scale of one to eleven. I shit no one when I say that this record is nearly perfect — that even Radiohead's "Kid A" would be difficult to give an eleven, only because that means "perfect," and perfect is only something that can be determined over time. Having been given half a year's worth of listening, no weights or misgivings holding me from calling this record nearly perfect.