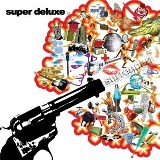 A few months ago I had a dream, one of those freaky dreams where you wake up and swear it was real. I don't remember much about said dream, but what I do remember is that I was listening to the latest album by Super Deluxe. And I liked it.

Now there were two crazy things about this dream. Crazy thing #1 is that this dream happened a few months before Surrender!, Super Deluxe's third full-length album and its first for local indie label The Control Group, was released. Crazy thing #2 is that without my asking, a few weeks ago a copy of Surrender! arrived in my mailbox. No joke.

For those unfamiliar, Super Deluxe is the local pop rock powerhouse that recently came out of retirement after a several year hiatus. Led by the soaring melodies of vocalist Braden Blake, the group was a bit of an anomaly in the rock world when its first record was released in 1995, which was arguably the pinnacle of commercial alt rock.

I remember going to a summer radio festival that year where Super Deluxe was the opening band on the second stage. Other acts at that festival — which was headlined by Mr. Gwen Stefani's band Bush, if you're curious — included Korn, The Presidents of the United States of America, and Everclear, all of whom were supporting their debut albums. That's the type of musical climate Super Deluxe was born into, and they managed to create one of the most pure post-grunge pop albums by a local artist to date with their self-titled debut.

That album, which is cherished and loved by many to this day, was released by Warner Bros. The band later released its second album, Via Satellite, a few years later, which was also put out by the Brothers Warner. However, that album didn't quite fare as well as its predecessor, and sadly the boys called it quits shortly thereafter.

Fast-forward more than a decade after their inception and we now have Super Deluxe's long-awaited third full-length, Surrender! On the album, Super Deluxe does something many bands try their whole careers to do: They successfully capture the magic and crafty pop style of their beloved first record, while taking that sound and evolving it into something that doesn't sound like a pathetic attempt to recycle the past, forging a new chapter for the band in the process.

Surrender! isn't the record of my dreams; surprisingly, it's better. The album is chock full of guitar-driven tracks that create the perfect backdrop for Blake's vocals. Sure, there aren't any tracks like "She Came On" or "Famous" on Super Deluxe's new record, but "Shoot" is as fun a song as any other in the band's catalog, and it's a blast to turn up loud and dance to. The spacey opening track "Come On" and its successor "Knockout," both whimsical slices of pop perfection pie, ake the album worth the purchase price. And unlike the band's debut, this record ends on great note with "Get Off," a song that hopefully signals the future direction of the band.

While Surrender! is a great record and will make my best-of list for the year, it's not without its flaws. Sometimes it almost seems like the boys in SD are trying a little bit too hard on some tracks, but they mask it well with killer melodies and great pop songwriting. If the guitars on "Know Your Enemy" were tuned down just a little bit lower it would have a Beach Boys-meets-Stone Temple Pilots vibe. The thought of a syrupy sweet band such as Super Deluxe being able to do such a thing makes my ears cringe. The rocking rhythms of "Safe and Sorry" and "She's Got It" slightly take away slightly from the record's poppy goodness, but these are minor blemishes on what otherwise is a great year-end release by a revered local band that has been gone for too long.

So here's to hoping the guys in Super Deluxe took the red pill before they decided to resuscitate their career so maybe they'll stick around a bit longer this time around.