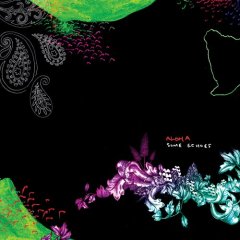 Aloha just might be the most underrated band in America. For nine years, they've been making music that relies simply on its find near-perfect aesthetics to find listeners; as musicians they exist just outside the mainstream, in a little niche some might call "prog," some might call "indie," some might call "experimental."

Some Echoes is their latest full-length, a follow-up to 2004's Here Comes Everyone, a record which CNN named "One of the best albums you didn't hear" for 2004, alongside Pinback and Tegan and Sara. It marks their fourth full-length release for the stellar Polyvinyl Records, and perhaps their most elegant record yet.

Keyboards are the clydesdales pulling the Some Echoes sled. Layers of velvety cushion the facets of 20th century aesthetics of sound as they pour like mercury out of speakers. Silvery and smooth, songs like album opener "Brace Your Face" carry on for six minutes, somehow conjuring easy similes to Philip Glass and the Velvet Underground — those past masters of subtle sonic changes in tension seem of obvious influence.

A history of improvisation behind them, Aloha on Some Echoes seem never to repeat themselves. Their keyboard parts might never change, but the guitar might never be doing the same thing, giving each verse a different context than the last. Cale Parks, one of the best drummers in the business, gives the band a controlled catastrophe of a beat, meter seeming to work itself around him, rather than him around it.

Meter can fill a song with a velcro-like remembrance. "Your Eyes,"* for example, is one of those triumphant songs which attaches itself to memory so that, in ten years, I might hear it again in some used record store and be brought back instantaneously to this same small apartment, listening to the rain hit the tinny roof of my air conditioner whilst the song plays on my computer's tiny speakers. The tiers of punchy keyboards meet Toni's watercolor tenor:

"A ghost in storefront glass reflecting a neon past / A buzz inside your headphones and in your head / I look with a magnifying glass, a view into your past / I know what you've been through, I know you."

For fans of their past records, That's Your Fire, Sugar, and Here Comes Everyone, this record finds Aloha gliding at bullet speed down the same path of progress they've been headed ever since their first single. They deny the reality of the music business by avoiding to alter themselves to it. Editors might be the "hot" thing after SXSW, and in a few months there might be a new Arcade Fire record for everyone to say, "Eh, not as good as Funeral" too — but by denying the mainstream of indie — for that's what it is now, isn't it? — and sticking to their 360 degrees of influence, every ebb and flow the tide of popular music takes still has room for Aloha's sound.

At times conjuring something of Radiohead ("Come Home"), something of Zeppelin ("Big Morning"), something of Karate ("Weekend"), something of Bach ("If I Lie Down"), and something that can only be by Aloha ("Summer Lawn"), Aloha is one of the truly original bands; their level of fame is reminiscent of those stories you hear of the Velvet Underground: They didn't sell a lot of records, but everyone who bought one started a band (or became a music critic).

If only more people could play the marimba like this.