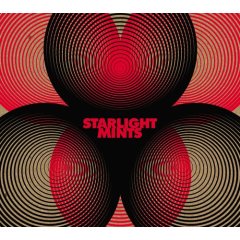 Sometimes it can be apparent when a band makes a big step from the Island of Misfit Indie Bands to Grown-up Rockville. These signs of success don't necessarily equate to a new, pro-success agenda — no, the change could very well reflect a band hitting its stride musically. That seems to be the case with the third Starlight Mints album Drowaton, where the Oklahoman band sounds tighter and more cohesive than ever.

Starlight Mints have always had a quirky feel to their music, something like a less nautical Decemberists or more earthly Flaming Lips. Their last album Built on Squares rollicked like a traveling carnival of freaks, driven by songs like "Black Cat" and "Brass Digger." Drowaton is more subdued and refined, with a careful attention to developing melodies, while still maintaining some of their signature Starlight Mints quirk.

The album opens with "Pumpkin," a song that sounds like a refugee from Blur's Parklife, right down to the "tra-la-la-la" of Allan Vest's falsetto vocals mingling in the circus atmosphere. The song fades into "Torts," which fuses a Stephen Malkmus-style lead vocal with the Mints jaunty sound. "Seventeen Devils" would be at home on Built on Squares with its dueling guitars and strings, but added in are handclaps in a Pavement-inspired chorus. "Rhino Stomp" is the most Tim Burton-esque piece of the disc — you half expect to see marching skeletons and ghoulish bats circling over head as the cello lumbers through the melody. A similar circus atmosphere is attained in "The Bee," where the Mints seem to be channeling a traveling band of minstrels from some by-gone era rather than modern day musicians. These songs take Starlight Mints penchant for quirky pop and add some finishing touches that make the songs feel much more complete than their previous outings. Nevertheless, a few of the attempts to refine their sound never seem to gain their footing, such as the title song, which seems a bogged-down Arcade Fire wannabe along with "The Killer." These songs don't capture your attention like you know the Mints can.

Then there are the songs that seem to be the Mints expanding their envelope. "Pearl's (Submarine #2)" is a fast paced, aggressive song that borrows more from Mission of Burma than Tom Waits. One of the standouts on Drowaton is "Eyes of the Devil." It screams "play me on the radio," right down to the sing-song chorus, drifting vocal harmonies and staccato guitar that hammer down the rhythm. It's a terrifically catchy song, without seeming gimmicky or cutesy. The anti-lullaby "Rosemarie" marches in on Marian Love Nunez's thundering keyboard and Andy Nunez's relentless drums, but slides into a gentle but eerie chorus of "Rosemarie/go to sleep." The album closing song, "Sidewalk," takes a page out of the neo-pyschadelia of the Earlies, with rich, full instrumentation that includes — but is not limited to — guitar, bass, strings, horns, drums and whatever else they could cram into the studio. "And if the stars collide/it ain't love until its over," croons Vest over the lavish horn section as the song drifts into the mists."

Drowaton offers a much more sophisticated sound from Starlight Mints. Their obsession with thick, luxuriant arrangements and infectious melodies is still there; however, they strip away some of the pretense and gimmickry that left earlier Starlight Mints discs somewhat inaccessible to the casual observer. Whether Drowaton draws in the well-deserved fanbase that the Mints deserve is anybody's guess, but it's the sort of album that feels like a good payoff for those of us who have stuck with the band through their first two albums.