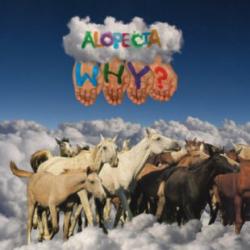 I have a soft spot for bands from Oakland. The city gets a bad rap, mostly because it is overshadowed by the capitol of smug, San Francisco. However, given a choice, I'd take Oakland on my side any day of the week, even with its Mad Max-style multipurpose stadium, questionable neighborhood and tendency to elect Jerry Brown mayor. The city's musical vanguard are some of the best of what music has to offer: Xiu Xiu, the Coup, various Hyphy types and now we can add Why? to that list.

Alopecia kind of snuck up on me. Sure, I was getting inundated by promotional material about the band. Heck, I think at one point I think I received 10 emails in a week from the promo company. I have to admit that all this self-created hype actually turned me off from even wanting to listen to the album. However, as it is with good music, it has a way on infiltrating your headspace. Why? tracks would pop up at random on my iPod and I would have to inquire who was producing such pleasant noises (and a couple times, wondering what the hell this shit was). And so, after the initial disgust with the attempts to jam the 5” disc of plastic down my gullet, I finally sat down with Why? for some quality one-on-one time … it was well worth the wait.

Why? might be best described as a fusion of Islands/Unicorns, MC 900ft Jesus, Grand Buffet, Beck and Busdriver (on downers). They are usually described as “indie hip-hop” or “avantcore” or “intelligent urban” or “whatever catchall we feel like because we have no idea how to classify the band.” So, yeah, they're a mismash. All I know is that they're fun, they're flippant (well, “rapper” Yoni Wolf at least seems to be) and they know how to write a pop song (whether they like it or not). The songs are laid-back stream-of-consciousness jams (“Good Friday”), rollicking dirges (“The Vowels Pt. 2”), synth-pop melodies (“These Few Presidents”), modern rock kaleidoscopes (“Song of the Sad Assassin”), modern rock radio hits (“Fatalist Palmistry”), power ballad (“Simeon's Dilemma”) and that only gets at half of the songs. Maybe they take some misteps with the songs just feel like they are dragged out of storage (“Gnashville,” “Brook & Waxing”), but these misses are far outweighed by the hits.

On one hand, Alopecia is dense and complex. On the other hand, it is about as straightforward as you can get. This is music for slackers written by slackers, sucking their influences out of the cracks in the TV and radio. It might have taken me a while to notice Why? (thank you very much so-called “promoters”), but after letting my guard down, they've shown me yet again the hidden gems of the other city by the Bay.