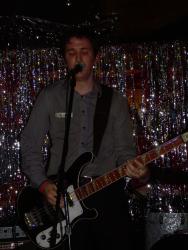 A memorable evening of Seattle rock with Altspeak, Erik Blood and Hotels

On Wednesday night, I found myself at the Sunset, curious as to what songs would be in the repertoire of former bassist for The Smiths, Andy Rourke, during his headlining DJ set. Unfortunately, it was to start a little later than I had hoped and the questions of what songs he played would be unanswered by me. If you are wondering if he was still playing “How Soon is Now?” I can’t answer it for you. I left just before midnight, which is when his DJ set was to begin.

Having said that, I am glad I got to this show early because I saw three excellent local bands: Altspeak, Erik Blood and Hotels.

The first band on the bill was Altspeak. While they cite a lot of Brit-pop influences like Blur, Oasis and Pulp on their website and MySpace page, the obvious comparison to me is from The Strokes. Both guitarists, Coulter Leslie and Andrew Gaskin worked well together, finding openings for one another in the same manner that Nick Valensi and Albert Hammond, Jr. did – they are lush and shoe-gaze-y but still rock out as well while singer Ignasi Faust has a drone delivery that reminds me a lot of Julian Casablancas. I wrote in my notepad that Altspeak makes me realize just how much I miss The Strokes, who haven’t put out a record in a few years now.

Altspeak is a very tight group musically and really does have the potential to be a very large presence in this town. They released their album It’s Up to You online, which you can (and should) download for free via their website. I feel as though this band is finding their voice and will be transcending their influences, rather than paying homage to them.

Up next was Erik Blood, who has assembled an excellent band around him. Producing several local releases I’ve enjoyed over the past several years (including Altspeak’s aforementioned record as well as those by bands like The Lights and The Catch) and as a member of another favorite band of mine, The Turn-Ons, he has impeccable pop instincts. Sharing some musicians with Altspeak, a few, like bassist Gaskin and drummer Will Hallauer, were pulling double-duty tonight and a few others like Coulter and Faust joined Blood to sing on a few songs.

Before the show I met the very smart writer Toby from the excellent Finest Kiss blog and he was telling me that he talked Blood into giving him a copy of record and if it had been released yet it would be one of his favorite albums of the year. Watching his set, it was easy to see why. The songs are beautifully crafted, with multi-layered guitar parts in the melodies and Blood himself is a very intelligent and gifted songwriter. I am very anxious to hear a recorded version of all of his songs and seeing him again in the near future.

The third band to play was Hotels, who I’ve known casually for over a year but – have never seen outside of a show or club. They have an electronic, keyboard-heavy sound that seems influenced by OMD or Depeche Mode and whose singer, Blake Madden, reminds me an awful lot of Ian Curtis (at least his harmonies do) – albeit more stable and less self-destructive.

Hotels was the first band this night to get a few people dancing (although many more presumably would for Rourke’s set). They really have emerged as a very good and very consistent rock band. Their sound often has some surf guitar parts to compliment they keyboard parts. They had just gotten a new keyboard player (whose name I’m having trouble confirming online) who seems to have grown more confident as he’s spent more time in the band – and on stage. While seeming nervous at first, he started to get more comfortable on stage and the band got better and better. They finished around midnight, just as I had to run out the door to catch my bus home.

I had wished to see Andy Rourke spin records next but with another show to cover the following night and a more-immediate day job to get to in the morning, the timing wasn’t right. I was sorry to miss him – but on the strength of the lineup that preceded him, I’m not that sorry.