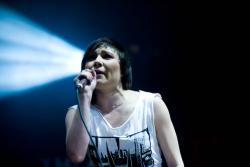 Aqueduct opened up the night, with David Terry greeting the audience in his jovial, well mannered way. He seemed even bubblier than I remembered in the past, repeated asking the audience “Are you ready to rock?!” and even giving a shout out to his coworkers at “TNS”, a video game designing firm. I seldom give much thought to the lives of rock stars outside the context of a stage, so it was a fun bit of trivia learning that Terry makes a living geeking out.

Shiny Toy Guns really loves 107.7. The last time I saw them was at another event of The End's- End Fest 2007 (TIG coverage). The dynamic shared between the two lead singers of the band and the Sisely Treasure's raw energy certainly revved the crowd up for next act, Cold War Kids.

I'm a really big fan of Cold War Kids, and this set wrapped out painfully fast for me. The soulful, full chested warble of lead singer Nathan Willett seemed as powerful as ever as he carried the set on through crowd favorites/singles “Hang Me Up to Dry” and “Something is Not Right With Me”.

Oh Death Cab, the darlings of all that is Seattle indie rock. I literally had to triple take as Ben Gibbard took the stage, and it wasn't until he glanced in my direction that I realized it was him. Looking at least 25 pounds thinner and sans trademark horn rimmed specs, he looked like an entirely different person. I had recently read about a funny (probably not that funny) blog post on DCFC's website involving a pair of pants and a scorpion and quietly laughed to myself.

None but the the band's exclusive photographer was allowed to shoot the Killers, but I can tell you that they rocked out an exquisitely prepared stage, complete with little skeleton figures, lights and palm trees. Enigmatic frontman Brandon Flowers strutted the stage, donning his feather laden blazer; his charisma clearly captivating the audience. Great success 107.7, year after year Deck the Hall Ball never ceases to disappoint.