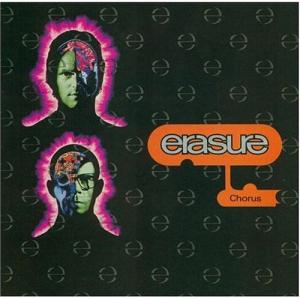 "Am I Right?" by Erasure

One of the things I tend not to admit when I first meet someone is the fact that the third CD I ever bought was Erasure's Chorus. I suppose, in most life situations, it would odd to find yourself trying to reconstruct your CD purchasing history in order to let someone you just met have an idea of what sort of person you are. I would say it's a safe bet that I've never admitted this fact to someone I've just met, and I would dare to say that I don't see it happening it any time soon. That being said, here we are.

After purchasing the Pet Shop Boys Discography and Depeche Mode's Violator, I did in fact buy Chorus. I suppose something might be said about my initial purchases, namely that I chose a suite of albums that would likely maximize the potential to get my ass kicked in any given central Massachusetts junior high (this being ~1991). Evidently, this didn't really strike me at the time, but I survived, and that is really what count. I, in fact, was able to purchase Chorus thanks to a $25 gift certificate for the local record merchant I won at a "rock and roll" bowling event, so I guess that I was already heading down the path of being a social outcast.

Looking back, I find it amusing that this was one of my first purchases. When a song like "Am I Right?" comes up, I get rather nostalgic and then I get a little confused about whether I actually think the song is good or the nostalgia is clouding my perception of the track. The song is cute, catchy, a pretty piece of synth pop from the twilight of British synth pop and for me, it is a constant reminder of how far I've come in 16 years, or I suppose, in particular, how it is nice not to live in fear of getting beat up as often.