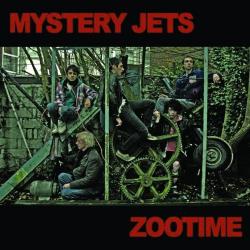 The Mystery Jets are a solid Brit Rock band, a statement can be seen as both good and bad. On the good side, the Mystery Jets are sharp, catchy, and clearly a band that takes their music seriously. On the bad side, nothing about the Mystery Jets really sets them apart from the crowded Brit Rock crowd. Zootime doesn’t pull any surprise punches, instead it offers a collection of songs that are all equally hummable, sturdily constructed, and eminently listenable.

The Mystery Jets are in the same class as Bloc Party, the Rakes, and Maxïmo Park, all falling off the Syd Barrett/Gang of Four tree. Nothing particularly wrong with this lineage – it ends up producing bands that like to play songs well-rooted in punk aesthetic but with pop sensibilities. However, it also produces bands that sound a heck of a lot like each other and that is the key flaw of the Mystery Jets. You have to get a few songs into Zootime before you get to something truly fun, that being “Scarecrow in the Rain,” a nice little song with more of a skiffle feel. It has a more organic sound that suits lead singer Blaine Harrison quite well. “Soluble in Air” tackles a bit of a Badly Drawn Boy type theatrical rock sound, while “Horse-Drawn Cart” almost echoes a traditional British ballad melody. Oddly, both songs work. The title track has more of a psychedelic feel, with Henry Harrison (guitarist and Blaine’s dad) squealing and howling away as the song sort of meanders along – you almost feel like the album accidentally wandered into a Rush concert. This is contrasted by the very British sounding “The Boy Who Ran Away,” a song that comes across like Libertines-lite. The song is catchy, but it really has the same staying power as a cheap bag of crisps. “You Can’t Fool Me Dennis” is in the same box (or bag, as the metaphor may be).

To be fair, Zootime is not a proper album from Mystery Jets. The disc itself is a compilation of their various British releases and this is apparent in the schizophrenic feel to the songs and song sequence. At the same time, the Mystery Jets prove that they have the chops to record a real tight pop rock song, but also they aren’t afraid to try some new avenues of adventure. Whether that pattern is just an artifact of the collection, it's impossible to tell at this point, but in the tsunami of post-post-punk British bands, the Mystery Jets haven’t made their mark just yet.