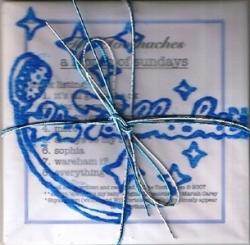 A Month of Sundays

There might be nothing more satisfying than stumbling across a band that is (a) really great and (b) undiscovered by most people. You feel like you’ve found a buried treasure and you don’t know if you should hide it away for yourself to enjoy or tell everyone you see on the street about it. Boston’s Toothaches are just such a jackpot, creating undeniably catchy pop songs that you can’t help but want to listen to over and over. Their debut EP, A Month of Sundays, is self-released, caringly crafted in the Jamaica Plain kitchen for their fans, and really, it is worth it to get this little gem.

Really, “the Toothaches” is an appropriate name for the band – to an extent. Indeed, they are rather sweet in the pop songs they write, however, with a name like the Toothaches, you might expect them to be overly saccharined. However, they seem to be keep it in check that you won’t be reaching for the phone to call your dentist. “It’s All Gonna Be OK” is a surprisingly subdued opening to the EP, evoking thoughts of another fabulous Boston pop band, Papas Fritas, along with “Hungover (and Over Again)” (I don’t know, maybe it is something in the water, but the pop bug seems to go another in the Hub). The Toothaches seem to have easily mastered the male-female call-and-response vocals, and listening to Zimmy and Monica trade lyrics on “More,” a love song for underdogs (to steal a line from Tanya Donelly) that has a whistle breakdown and a sparse arrangement that works unexpectedly well. “Kiss Me Sweetly” is a playful ukulele (?) driven song that reminds of fellow Boston popsters B for Brontosaurus and ends up as a real charmer, especially with downright cute lyrics like “I know it sounds Parcheesi but my battleship’s been sunk” (albeit the kissing noises might little overkill). “Wareham I” (I suppose you have to be from Massachusetts to get that title) is out of the same quiver.

You do have to give points to any band that decides that a cover of a Mariah Carey song is something to tackle on their debut EP, and likely explains to oddly R&B vocals that the band breaks out for the song. It might not be the best step the band takes, but if you wanted a counterpoint for the absolute gem that follows “Always Be My Baby”, then they found it. “Sophia” is one of those brilliant pop songs that you wonder how long before everyone will be humming it. Driven by xylophones, handclaps and downright cheerful “do do do” harmonies, the song is impossible to stop listening to – trust me, when it randomly came up on my iPod one day I went on to repeat it about 10 times before moving on. The Toothaches end the EP with “Everything,” a surprising turn that shows that the band has more depth than some of the bubblegum pop that precedes it, integrating violins and cellos with ease, creating a melancholy ballad that rounds out the disc nicely.

Sure, A Month of Sundays might be a little rough around the edges, but that probably works to the Toothaches advantage. You really feel like you’ve gotten your hands on something that is made by people who love what they’re doing rather than a studio-magicked conglomeration of musicians. The songs that fill the EP are playful and catchy without sounding amateurish, leaving you with nothing but a sweet taste in your mouth, which I suppose is exactly what the band wants anyway.