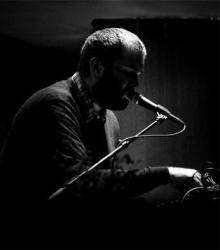 I like to think that music is continually evolving and progressing to fit the technological equipment available; and because there is so much available now, in many ways bands are able to push the envelope with vast libraries of unique sounds at their fingertips. Last Friday's show at VERA was all about pushing the envelope, sometimes successfully and other times a tad too far.

The line-up opened with talented Tacoma band Ghosts and Liars, who charmed the small crowd with their sweet folk-rock melodies. Next was a mellow rock band called Baby Panda, a new project by Paul Gonzenbach of the Jim Yoshii Pile-Up. Looking back on it, I'm convinced these somewhat conventional bands were intentionally booked as openers in order to lull the audience into a false sense of normality. It worked on me at least, and thus I was completely unprepared for what came next.

Concern, a one man ambience project conceived by Gordon Ashworth, took to a stage littered with power strips, dozens of cords and a few massive synth machines.  The one man band set about plugging things in with such concentration that he seemed to us to be a mad scientist. His method was incomprehensible to us, but we watched in awe as the simple act of setting up was a performance on its own.  Then came a low rumbling noise. After about five minutes of it we realized that it was not part of sound check, it was the beginning of a forty-five minute journey Concern was about to take his small audience on. The sound was not a note per say, but it filled us with an overwhelming sense that something exciting was going to happen.

Not knowing what to make of it, my friends and I closed our eyes and pretended we were on a launching spaceship. The mad scientist worked his machines on stage, looking entirely unaware that a handful of confused teenagers were watching his every move. With deft certainty he made minute adjustments to his synth, and took out a variety of tools to warp the sound including a small cassette player with ocean noises on it, a contraption that looked like a large bellows and an acoustic guitar which lay on a chair, somehow making sounds while no one played it. And then, just when we had adjusted to the song which lacked a beat and melody, Concern surprised us again. Quieting his computerized composition (sounding now like a slow air raid siren), he took up the lone acoustic guitar and began to play it with a great deal of skill. He picked a catchy and refreshing tune for a short while, and then abruptly ended his song, leaving us as unsure of an ending as we had been of the beginning.

I do not pretend to understand Concern's unique music; I believe it is much too avant gard for me to grasp. However if there is one thing I can say about it, I would mention that throughout the performance my friends and I were able to create a story, and with the addition of each new sound our story continued. Maybe that's not what was intended, but in the end I was not able to say I liked or disliked Concern: I liked our interpretation of it, but the music itself was beyond me. It was an unexpected performance for a night I had assumed would be filled with poppy electro beats like those of the headliner, Casiotone for the Painfully Alone.

Casiotone is another one man band from Chicago whose sole member Owen Ashworth turns out to be the mad scientist's brother; the two are touring together to promote a new 7" Bruce Springsteen cover album they collaborated on. While their sets looked similar, both consisting of only a man and his computers, the two siblings' music could not have been more different. Casiotone is known not only for its poppy, synthesized melodies but for its earnest and endearing lyrics that describe everything from the emotional significance of a broken pearl necklace to Ashworth's love of Creedence Clearwater. The set was filled with catchy gems, causing sporadic patches of dancing in the crowd which had swelled considerably since the previous act. Ashworth frequently consulted the audience on which song he should play next, and received shouts of "Graceland!", "Creedence!" and "Mother's Day!", to which he once responded, "Alright, I'll play all those right now – simultaneously," however due to the limitations of physics he was unable to deliver on this promise. Later in his set, Casiotone was joined by Jherek Bischoff of The Dead Science, who added to the charming beats with a reverberating bass for a several songs.

I am well aware that music will change and morph as I grow older and I believe that the electronic melodies and unique delivery of Casiotone for the Painfully Alone may be the future of pop music. With the incredible synthesizers available now, one man bands are becoming more common, and the laptop rock genre is getting more sophisticated as computerized instruments being perfected.  There is something distinctly intimate and personal about hearing the music of bands like Casiotone. The knowledge that what you are hearing is the pure, unadulterated musical vision of the artist makes each song something like a conversation, like a sentimental story they are sharing with you, and the relationship this creates with the performers make live shows like this one all the more special.