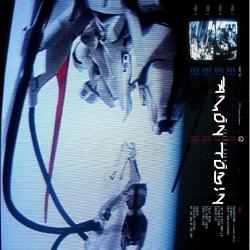 It has been over a decade now since Brazilian DJ Amon Tobin started making some of the darkest, most seductive, and most invigorating electronic music in the world. All of his music has a cinematic feel as if its painting a scene that doesn’t exist yet, usually a scene that would be threatening and bleak, like something out of a post-apocalyptic nightmare. Tobin has never done a true soundtrack, although his last album was the “soundtrack” to the Chaos Theory: Splinter Cell 3 videogame. Now Tobin really takes the cinematic bull by the horns and has recorded his new album in a foley room (you know, where they make all the sound effects for film) with live samples and with the help of some of the most cinematic musician in the business (such as the Kronos Quartet). What results is the aptly titled Foley Room, one of Tobin’s most diverse and most refreshing (and still excellent) albums to date.

Tobin (born impressively as Amon Adonai Santos de Araujo Tobin) has always sounded like a misfit in the realm of acid jazz/jungle, tending towards more hip-hop style rhythms mixed with the sinister samples with which the beats are intertwined. On Foley Room, Tobin is more subdued and mature, relying more on a mixture of real sounds (collected by him and his cohorts) rather than merely layered beats to produce mood. This is apparent from the get-go, where “Bloodstone” comes across (at least the first half) as an orchestra warming up before the show, only for the song to descend into monstrous beats interlaced with the strings and tapped piano – true Tobin indeed. “Esther’s” is more energetic, mixing what sounds like a motorcycle engine over fast beats that are reminiscent of “4 Ton Mantis” from Supermodified.

If you’re looking for classic Tobin, tracks like “Keep Your Distance” retain the sound that makes Tobin, well, Tobin. The reverberating bassline over the tribal drums and samples noises are exactly what you would expect from the DJ and remind you why this guy is the master that he is. There are some odd, quirky sojourns that Tobin makes, like “Kitchen Sink,” something you might feel more likely to expect on a μ-Ziq or Aphex Twin outing, with random blips and blurbles within the uncertain beat. The equally strange “Horsefish” has an undeniable Bjork-meets-Portishead feel with the harp and low guitar and non-existent pulse; it's one of the most abstract compositions Tobin has put together. The title track, on the other hand, is very Tobin with a rhythm that gets you from the start and thunderous breaks that less you breathless (mostly in fear of whatever terror the sound portends).

Where Tobin really excels on Foley Room is on “Big Furry Head,” where he combines his sinister sound with the new-found love of live samples into a downright horrifying vision, like a sonic Frankenstein that you can’t outrun. On the flipside, “Always” works for similar reasons but comes out sounding much more jovial and fun-loving, like an answer to “Get Your Snack On." The album finishes out, fittingly, with “At the End of the Day,” which returns Tobin to his home turf, meshing deep beats with orchestral sounds and an ethereal keyboard line that hypnotizes as it snakes through the rhythm. A few of the tracks don’t feel fully realized, like “The Killer’s Vanilla” (even killers like to bake cookies, you know) that mixes the somber strings of the Kronos Quartet well, but you keep on expecting the track to fully bust out. “Ever Falling” is oddly poppy for Tobin at first, with real human vocals before it descends into an Aphex Twin like chaos, however the song itself might just be a little to splintered to really work.

Foley Room finds Tobin in his top form, both returning to the sound that he has pioneered and expanding it to new reaches. Sure, it might not be the fully non-stop club record we usually expect from Tobin, but in this era you need to do more than fill a dance floor as a DJ to be remembered. Tobin proves his chops as a more than just a DJ, but as a musician who is a master of his genre.