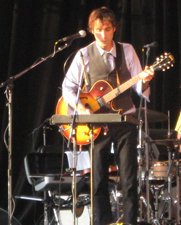 It’s not that Andrew Bird and his three-piece Chicago band put on a perfect show last Wednesday at Woodland Park Zoo. It’s just that it all felt so right. At one point well into the evening—after a version of “Imitosis” that sounded like the Armchair Apocrypha track but also like something entirely and wonderfully remade—Andrew said, “That felt right. It felt the way it was supposed to feel.” Exactly, I thought. Exactly.

I’m not going to lie, though. I was a bit nervous about seeing, for the first time, an artist I adore play at the zoo, in front of a field crammed with blankets, families, and coolers. After all, it has been a while since I’ve seen a show that wasn’t in a club crowded with fans who seemed to know every word, every EP, and every b-side ever recorded by the headliner. Wednesday’s performance was a bit different. At the zoo there were crying babies, side conversations that had nothing to do with the performance, and even a few who packed up and left early like they were rushing out of a Mariner’s game.

But it really didn’t matter. When Andrew Bird came on the stage the sun came out. I don’t mean like in a flowery poetic way. I mean that, when Andrew began strumming and plucking his violin in passionate and manic flourishes, the crowd silenced and the sun shone for the first time that day. I love it when life imitates art.

Somewhere in the middle of his set, Andrew Bird praised the audience for their “good toddler dancing” and sang a children’s song he called “Dr. Stringz” and I thought, sure, why shouldn’t this be the perfect setting for Andrew Bird? There is something beautiful about kids dancing while Andrew sings “I’m gonna tie your wrists with leather/and drill a tiny hole into your head” on “Fake Palindromes.”

Actually, that’s kind of what I love most about Andrew Bird: his ability to turn morbid lyrics into something quirky and playful. And he totally did this on Wednesday. When introducing “Spare-ohs,” Andrew said the song is about little chicks he raised. They were eaten by coyotes, and he imagined cremating them and spreading their ashes over towns and suburbs, he said. So when he started singing “the finches and sparrows build nests in my chimney/what remains of the small flightless birds that you failed to protect” it was kind of funny, and kind of sad, and kind of beautiful, too.

What about the musicianship, you ask? Andrew Bird’s live shows are famous for their dizzying display of musical dexterity, and now, after seeing him, I’m pretty sure that Mr. Bird is the Willy Wonka of music. How else could just four musicians create such a symphony? It had to be magic.

Or so I thought as Mr. Bird and the boys played a set drawn mainly from his two most recent (and most enigmatically titled) releases, Andrew Bird and the Mysterious Production of Eggs and Armchair Apocrypha. On stage Andrew slipped between instruments—looping and layering violin, glockenspiel and guitar with his adorning vocals, ethereal whistling and polyrythmic handclapping. Andrew was always doing three or four things at once. He might stand, guitar slung across his back, and play the gloc with one hand, hold the violin at the ready with the other, and sing into the mic; or he might loop a guitar part with his foot and whistle and clap into the mic. At times, drummer Martin Dosh joined the dance, pumping foot peddles to loop drum parts while his emancipated hands played keyboards.

Behind the band, two red and gold horns that looked like phonographs spun and whirled. I can guess that these machines had some part to play in the looping process, but really, I like not fully knowing the purpose of these bizarre things. It was like watching a magic show. Andrew Bird dancing and weird gizmos spinning to create a strange and beautiful symphony. Oh what a lovely sound.

Setlist (Did I miss anything? Let me know!):
“Why”
“Fiery Crash”
“A Nervous Tic Motion of the Head to the Left”
“Spare-ohs”
“Plasticities”
“Imitosis”
“Dr. Stringz”
“Fake Palindromes”
New Song: “On Animal”
New Song: “Master Thorn”
“Tables and Chairs”