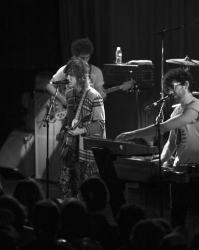 Honestly, I didn't quite know what to expect when I went out to see MGMT at the Paradise Rock Club in Boston. Four or five months ago I remember noticing them playing at a small local venue and I checked out their myspace. Surprisingly, every time they popped up on my radar it seemed these small shows were sold out again and again with tickets consistently unavailable at the time I finally got around to finding out. Later, a friend told me one of MGMT's songs, "Time To Pretend," was an iTunes free track of the week. I downloaded and enjoyed. Quckly MGMT became one of those bands with one song on my playlist. I made a note somewhere to get their album – this never happened.

Then came their shows at the Paradise – two shows! Plenty of advanced warning to get myself settled. I got my ticket and I was finally set to see a band I still knew very little about. Showing up at the venue I noticed the back to back shows were again sold out. It seems this "little band" had somehow exploded while my back was turned. It was at this point I realized I should probably do some research. MGMT is the duo of Andrew Vanwyngarden and Ben Goldwasser, "two psychic pilgrims whose paths first intersected in the green pastures of Wesleyan University circa 2002," according to their webpage. Their live band consists of three extra members assisting with bass, drums, and guitar.

It was difficult to get a feel for how excited the Paradise crowd was to see their beloved MGMT. They gave a rather rousing round of applause at the first sights of the band, but it was nothing unusual – a group of glow stick aficionados pumped their plastic light sabers in the back row, some people made awkward attempts at dancing amidst the mob. MGMT came out looking like the cast of Jesus Christ Superstar – robes, pajamas, and headbands hung from their clothing. Their nonchalance resonated with their stage presence. At one point a glow stick hit Goldwasser in the face. He simply picked it up and placed it atop his head, wearing it like a halo for the duration of the song.

Minor dancing picked up throughout the show, but there was always a spark of excitement lurking beneath the crowd. I could hear voices whispering "Time To Pretend" in between every song. It was clear MGMT's fans have their favorite tunes and they were yearning to hear them. Not to say the crowd didn't recognize and willfully cheer away at the other songs. "Pieces of What" seemed to be a particular favorite, or maybe that's just me.

Finally, after over three-quarters of an hour of playing, MGMT went into their bread and butter and whipped out a rocking version of "Time To Pretend." The crowd had immediate smiles plastered on their faces – everyone excited about getting a chance to see a band at the dawn of stardom. The couple next to me shouted whelps of approval in between making out, at one point a random girl grabbed my shoulder and shouted, "They're SO GOOD!"

All of this was much of what I expected, but it's what came next that really blew me away. Following "Time To Pretend" the band left the stage, leaving only Vanwyngarden and Goldwasser roaming the floor. After a few moments of confusion amongst the crowd (and perhaps the band as well) the synthetic beats of "Kids" came roaring through the speakers. Belting away with completely un-hearable vocals, the two core members of MGMT had complete control over their audience. Bodies jumped and pounded away to the electronica masterpiece. The crowd turned from stoner-rock swaying to full fledged thumping. Eventually the rest of the band came back on stage to pound out noise on the various keyboards, willfully adding to the insanity of "Kids." This was, by far, the climax of the show.

MGMT then left the stage for an unusual encore break. With the last beats of "Kids" still pounding away, and the house lights half up on the crowd, it almost felt like the show had come to an end. I saw a trickle of people heading toward the exit, but the majority of fans were confident in an encore. It felt like a long time – five, six minutes maybe, but it was difficult to tell. The crowd roared when a guitar-weilding man hopped onto the stage only to be recognized as a roadie moments later. Finally the band revived themselves and played a couple more tunes. To me, the entire encore felt something of a letdown. The band had given us their best one-two punch with "Time to Pretend" and "Kids," leaving with songs that were solid and entertaining but with nowhere near as much energy. With their final two songs, MGMT felt and sounded like a jam band closing out their show with wild flair. It was clear the crowd preferred the electronic-infused rock, but it was still a rousing finish to a solid overall performance.