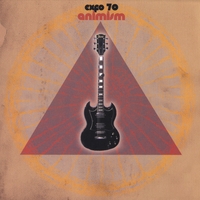 The liner notes for Animism explains that not only are almost all of the songs on the record improvised, but that Justin Wright used electric and acoustic guitars, as well as gongs, to create them.

If you haven’t already clicked away from this review after reading that sentence, I would hope that your interest would be piqued by what Wright — performing under the name Expo ’70 — does. The seven tracks on this disc are breathtaking epics of drone and spacious hum, unfolding in glacially in the manner of groups like Earth and Spectrum.

It seems strange to say, but it might be a good thing that Wright recorded this album on his own. There is enough room in the songs from them to breathe deeply, but others might feel the need to push them too hard, both in terms of energy and volume. By himself, Wright is able to let them evolve naturally, letting inspiration come when it comes. It materializes often and gloriously on Animism, and thankfully we are blessed with it on this near-perfect album.