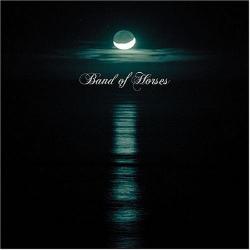 Cease to Begin has left me feeling very torn. Normally if I am feeling indecision about what score to bestow upon on album, it is a question of a few fractions of a point – whether it deserves an 8.2 or 8.4 – these sorts of studies in small variances. However, Band of Horses has left me with a much larger dilemma. Part of me really does like Cease to Begin, it is catchy, frothy and rockin’. However, there is another part of me that is, for lack of a better word, horrified. The album is so palatable that it almost comes across as pandering to the need to expand their fanbase to the point that Band of Horses has recorded the Classic Rock Album™. So, how to bring unity to the West Bank of my mind?

Band of Horses seem to be the version of Built to Spill that you wouldn’t be afraid to bring home to Mom. Doug Martsch is kind of crazed and scary – I’m sure the folks would wonder why this homeless vagrant was lingering about their daughter – but Band of Horses, although also well-bearded, seem to be much more agreeable. This isn’t really a surprise to anyone, as Everything All the Time was a gem, so universally loveable that even Wal-Mart latched onto the Band of Horses wagon. Then, you lose a band member (Mat Brooke, to Grand Archives), move from the Northwest to the Southeast and start recording a follow-up to one of the stealth hits of the previous year, and you’re not sure which way to face anymore. Ben Bridwell, the man in charge of Band of Horses now, seems to have decided to record a rock and roll record that is both triumphant, over-blown and, well, boring, simultaneously.

Cease to Begin opens with “Is There a Ghost,” about as by-the-numbers of a Band of Horses song you might ever hear. The song is drifting and ethereal, but packed with so much guitar that once it gets going, you wonder if you stumbled into the Catherine Wheel Ferment sessions. The song is pleasant enough but lacks the inspiration that made songs like “Funeral” so captivating. “Ode to LRC” really gets back to a Built to Spill/Neil Young core of the band and that is about as interesting as the song gets. You have to enjoy the southern rock feel of “The General Specific,” a foot-stomping (literally) number that keeps your attention. However, if you’re looking for the real “hit” on the album, look no further than “Island on the Coast.” It opens with a glorious, rolling guitar line that washes up next to Ben’s vocals, mixing into the lathered chorus that is impossible to get out of your head. Melodically, it might be one of the most complex and satisfying tracks on Cease to Begin. Another high point is “Cigarettes, Wedding Band,” a dark rocker that has plaintive guitars crashing down until Ben’s semi-non-sensical chorus kicks in.

Songs like “No One’s Gonna Love You” are just pop-rock fodder, bordering on sappy ballad territory. The same can go for “Detlef Schrempf” and although I might imagine Ben might be trying to rally support to keep the Sonics in Seattle, the song itself is a sleepy ballad that really doesn’t use the Band of Horses bag of tricks to its fullest. “Marry Song” carries on this dirge mantra to no one’s satisfaction – this is like a Neil Young tribute band.

I think the biggest failing point of Cease to Begin is the overarching feeling that it was recorded with such a fevered pace that the band never sat back and wondering what they were doing in the first place. At times, you can really hear the promise of Everything All the Time in some of the well-developed tracks like “Islands on the Coast;” however, a lot of the album is filled with fairly uninspired and characterless songs that fulfill our need to rock but that is about it. Hopefully, the boys can take a break in their new southern home and dream it up all over again for the next time out.