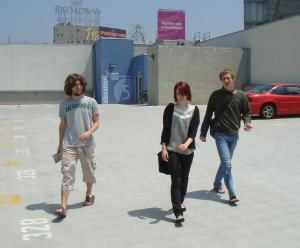 An interview with The Subways

Ever since the first time I heard The Subway’s ridiculously catchy hit single “Rock and Roll Queen” in 2005, I’ve been a fan of the young UK rock trio. It was a simple pop rock song that that was easy to sing along with and I’m sure there were many a people that put the song on mix CDs for their crushes because of its chorus (“You are my queen, my rock and roll queen…”), which was romantic and sweet without being sappy. They were only in their teenage years or early twenties when that song was getting heavy rotation on radio stations across the country.

The Subways consist of singer/guitarist Billy Lunn, bassist Charlotte Cooper and drummer Josh Morgan. In a lot of ways they are an ideal young band: full of energy in their live shows while sounding tight and focused on records. They are scheduled to release their second album All or Nothing on Warner Brothers in September. It is already out in the UK and the NME has called it “the best British rock album of the year so far.”

I spoke with Billy and Charlotte a few hours before their recent show in Seattle. The interview took place at Chop Suey just after they finished their soundcheck.

I have not been able to hear All or Nothing because your label was understandably concerned with it being leaked to P2P networks almost two months before its US release. What does it sound like? How does it differ from your first album, Young for Eternity?

Billy: It sounds a lot heavier and definitely more melodic and more honed because for Young for Eternity we toured for two and a half years and during that time we wrote the new songs on the road, while seeing all these amazing new things. I think it is way more articulate and a lot less simplistic. I also think it is more exuberant, more rambunctious and energetic than our last record was.

Really? I would exactly describe Young for Eternity as rambunctious, exuberant and energetic. Just before this interview I was listening to “Rock and Roll Queen” on my drive down here and after almost 3 years it still sounds great listening to it really loud in your car with the windows rolled down on a hot summer day.

Charlotte: I think it’s really a good thing if your record can be listened to while driving.

Billy: Especially if it makes you want to drive faster.

How was the songwriting process different from the last two records?

Billy: When we wrote Young for Eternity, we were mostly in a rehearsal room in a local community center right near our house and now we’d mess around with ideas during soundchecks.

Charlotte: And the room we would be in was not much bigger than this space we’re sitting in now. It was absolutely tiny. A lot of things on this record were written during soundchecks when we’ve been on tour. I think that helped get the atmosphere for a bigger sound and make us want it to be heavier.

Billy: One differentiation on the songwriting was that we were sort of stuck in Welwyn Garden City, sort of living our normal lives as teenagers, so our songwriting scope was limited in that respect. We took influences from the records we were listening to at the time like The Von Bondies, Oasis and Nirvana. When we were writing All or Nothing, we were on the road, going from different cities and different cultures, meeting all these new, fantastic people. We were also meeting a lot of our heroes and getting to tour with Taking Back Sunday, The Foo Fighters and Oasis; that really affected us in a big way, helping us develop as people as well as musicians. There was really a big scene change for us between records and you can really see that in how we portray ourselves and how we articulate ourselves on the second record. We’re ten times the musicians now then we were on the first record. Charlotte is ten times the bassist she was and Josh is, well, Josh was always really good on the drums.

Did you know that “Rock and Roll Queen” was going to be a hit when you finished recording it?

Charlotte: It is so hard to tell what people are going to respond to. It is so difficult for us to pick hit singles. We just leave it up to the people that know what singles to pick. For both albums we made a collection of songs and each song has a different kind of meaning.

Billy: The important thing is that we made the record and we enjoyed making it and playing it live. That for us is the most important thing. For “Rock and Roll Queen” and “Oh Yeah”, we spent two days recording them. It was such a quick process. It was our first time in a really big recording studio and it was quite daunting but we were pretty happy with the results. I don’t think we expected much.

Do you have any expectations for All or Nothing?

Billy: I think it’s pretty much the same. I think about how proud we are of it and how much effort we put into recording it. I played it for my mom and she said it was really amazing. For my mother to say that, that’s enough for me. We’re just looking forward to playing these songs live right now.

Charlotte: We wanted a reason to get back on the road. We want to get as many people to hear it but we’re just excited to be back in the US. We really missed it here.

If I’m not mistaken, the last show you played in Seattle was at the Crocodile Café.

Charlotte: We actually played once since then with Taking Back Sunday.

Billy: (laughs) I also remember that show because my guitar kept breaking down. It was so aggravating because I wanted to rock out. We just had a really great time and we’ve always had really amazing experiences in Seattle, though. We were just saying that Seattle is in our top three…

Charlotte: I think in my top two…

Billy: Favorite American cities. I was telling Charlotte recently that I was thinking of buying a place and said we should move to Seattle, it’s my type of place. There are certain parts that have a bohemian, almost Paris-like feel to it. It was rather cool.

What new songs are audiences responding to? I especially like “Boys and Girls” and “Kalifornia”.

Billy: We usually start with “Kalifornia”, usually because it is straight, in-your-face rock. “Girls and Boys” goes down really well, too. It’s really cool seeing people sing the lyrics because the record isn’t even out here yet.

Billy: Yeah, those two are right in the middle of the set and they are easily two of our heaviest songs. As soon as we start playing those, the audience just goes crazy.

Charlotte: Oh, we love it.

Billy: We live for it. When we wake up in the morning, it’s why we wake up in the morning. You know, people ask us which we prefer, the studio environment or being on the road, and, to be perfectly honest, we make records so we can get out on the road. When we are at home we are bored and without purpose. We love the connection with the audience. To be on stage and have people in the audience singing lyrics you wrote in your bedroom when you were seventeen is quite an amazing experience.

How do you write songs together? Do you (Billy) write most of the lyrics and then have Charlotte fill in her basslines and some lyrics and Josh fills in his drum beats?

Billy: Pretty much, that’s how we do it but sometimes the formula changes slightly. The initial idea usually comes from me. I write all of my parts on acoustic guitar and the
n we decide if it is going to turn out as a heavy or acoustic song. All the songs are written acoustically because if you can break a song down to its acoustic elements and it still sounds really good, if it can have impact and poignancy to it, then you’ve got a song to work with. When I take it to Josh, he usually decides it is going to rock, no holding back. Charlotte and I really are a melodic partnership. We work out songs together and Josh adds the raw, primal energy to the song. Charlotte and I are the brains and Josh is sort of the balls.

For one song, “Strawberry Blonde”, Charlotte played the best bassline I’ve heard since Death Cab For Cutie’s “Summer Skin” and we took it to Butch and we worked out the piano parts and he said it was amazing and “let’s get Josh in the studio to lay down the drum parts”. That was a different formula because we wrote it in the studio, but if we are on tour I’ll just be playing an acoustic guitar and Charlotte would pop in, or Josh would walk in and say it was great and start tapping on the seat. Because it is three of us, it can work either way.

The Butch you are referring to is Butch Vig, who produced All or Nothing, right? How was it working with him, considering that he has one of the most impressive resumes a producer can have?

Charlotte: It was amazing just to meet him. He worked on records we grew up on, like Nevermind, Gish, Siamese Dream, Dirty by Sonic Youth and then I really love Garbage, so just to meet him was amazing but when he totally got our songs, it was a perfect match.

Billy: And after being on tour for so long with Garbage, I think he was really looking forward to getting back in the studio. He made our record and Against Me!’s fantastic album New Wave. We really needed that kind of mentor. I am a big fan of rock music and pop music and with Butch being a musician and a producer, he really knows how to deal in both respects.

Charlotte: Both producers for our albums were also musicians so they can understand when you’re getting frustrated.

Billy: We’re very temperamental people. When we find a producer, we need someone we can be upset in front of because when we make a record it is an emotional journey and we put everything into making this record. Working with Butch was like we found a fourth Subway who understood what we were trying to do. Josh really got on with Butch well because they’re both drummers. We all had the time of our lives making this record. We went through an amazing journey.