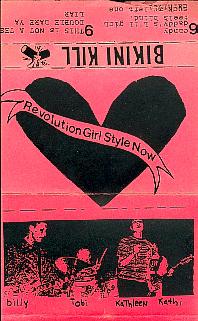 An alternate title to this post was going to be "Girls Exposed to Rock 'N Roll at Rock 'N Roll Camp for Girls".

Here's the story: a woman took her 8 year old daughter to the Rock 'N Roll Camp for Girls this summer and was outraged that her daughter came home with a Bikini Kill cassette. In fact, she was so outraged that she went straight to the local news media and demanded anonymity. The local Fox affiliate in PDX (KPTV) in keeping with the Fair and Balanced theme confirms that the lyrics on the Bikini Kill songs are horrible and offensive.

Now, I understand Bikini Kill may not be appropriate material for an 8 year old (although if I ever have children and my daughter ever brought home a Bikini Kill cassette I'd allow her to listen to it and even tell her about Heavens to Betsy, Julie Ruin and Bratmobile), but the reporting on this is embarrassing and unfair at best. All that is being presented in this story is that the Rock and Roll Camp for Girls is giving offensive material out to campers. No testimonials from other former campers about how empowering and life-changing the camp is (I read them all the time) or no context of what Bikini Kill was singing about or about how there are counselors like Carrie Brownstein (of Sleater-Kinney) or Beth Ditto (of The Gossip).

Just looking up Bikini Kill's Kathleen Hanna on Wikipedia, I came across this quote from a 2000 Bust Magazine interview in the second paragraph:

My mom was a housewife, and wasn't somebody that people would think of as a feminist, and when Ms. magazine came out we were incredibly inspired by it. I used to cut pictures out of it and make posters that said "Girls can do anything", and stuff like that, and my mom was inspired to work at a basement of a church doing anti-domestic violence work. Then she took me to the Solidarity Day thing, and it was the first time I had ever been in a big crowd of women yelling, and it really made me want to do it forever.

Of course, whoever sees the above story on the local news in Portland would be left with the impression that Hanna spews violent "hate speech" (whatever the hell that is) and have no idea about all the wonderful things both she and the Rock 'N Roll Camp for Girls has done.

I dunno, am I overreacting or missing the point? I know that local television news doesn't exactly set the standard for excellence in journalism but this strikes me as way too similar to the hysteria surrounding emo last year.