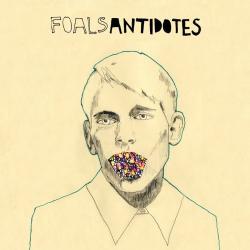 Foals are one of those bands seems better on paper. Maybe it is because they're kind of on the back side of a trend. Yes, they're dancerock, they're part of the British new wave revival, taking bits and pieces of punk, early '90s dance and modern rock, blending it all together. Sure, it is catchy, it is tight, it is full of energy, but you also feel like maybe you've heard a lot of it before. If Antidotes was released in 2004, we might all be taking about how they will save British music, but alas, it is 2008 and although Antidotes is sharp, it is also a little too familiar for its own good.

Unlike their brethren like the Klaxons, Foals have a little more substance. If anything, you could say that Foals is Bloc Party if the latter didn't try to hard to be an arena rock band. The music is jagged, sharp on all edges but still deeply rooted in pop structure. If anything, Foals are the illegitimate spawn of the Buzzcocks and Public Image Limited, which of course, could be applied to quite a few current British bands. However, that being said, there is a lot to like about Antidotes. "Cassius" is a great song, integrating the dance rhythms of Bloc Party or Franz Ferdinand and integrating with an Art of Noise horn section, wrapping it all up into a full throttle rock song. The bonus track, "Mathletics" is a real gem, aggressive and fascinating at the same time. "Tron," besides its obvious inspiration, is a robotic piece of new wave fun, taking Gary Numan and ramping him with agitated guitars. The real Achilles' Heel of Antidotes is that a lot of the songs just sound like the same song at different tempos. There is nothing particular different between "Cassius" and "Olympic Airways", which isn't necessarily a bad thing as they're both good songs, but Foals come across as a band that might be stuck in a rut.

Antidotes might best be described as a solid debut album. The band has the chops and it is obvious they can really write interesting dance rock songs. However, if the band can expand from this or that they are really a one trick pony is unclear. If you've fallen in love with the new generation of British bands like Bloc Party, Klaxons, These New Puritans and the like, then Foals will fit in quite nicely in your collection, but if you've been immune to the trend, Antidotes is not going to change your mind.