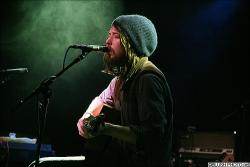 Fleet Foxes warm up the soul

Ever since my first Fleet Foxes experience several months ago at Ballard’s Reverb Festival, I’ve anxiously awaited another chance to catch this young band. There’s something simply magical about this local quintet’s sound, and the anticipation was getting the better of me as the week carried on. So on Friday night, as I sat at work trying to wrap up my day to head to the Hill for pre-show dinner, it started snowing. Yes, it’s April 18, and it was *snowing* in Seattle.

But for as cold as it was outside, inside Neumo’s was a hot throng of excitement and body heat. I’ve been to sold-out shows at the club on numerous occasions, but never before has it been so uncomfortable. We’re talking Fire-Marshall-citation full (fortunately for the club, the marshalls didn’t show up to check).

Fleet Foxes have been away from Seattle for a couple months, during which time they released the Sun Giant EP {review} and skyrocketed to local attention. The band were pleased to be home – and seemed a bit taken aback by the masses swarming to see their little music project. (And the masses really were there for Fleet Foxes; after their set and before headliners Blitzen Trapper took the stage, the place cleared out considerably.) The crowd drawn by the Foxes was happily diverse—I saw young and old, hipster and hippie, side by side, blissed-out in the moment.

From the first note of their hour-long set, the crowd was enthralled—though the quiet listeners eventually turned a bit rowdy, catcalling and whistling as the set progressed. Especially lovely was the exquisite “English House” and “Drops in the River” (which always reminds me of the first Badly Drawn Boy record—never a bad comparison), and the transcendent “White Winter Hymnal.”

That first time I saw Fleet Foxes, their energy and harmonies transfixed me. My senses tingled, and I had the feeling this band was something special. Since then, in addition to signing with Sub Pop and showing up on festival lineups around town (Sasquatch, Sub Pop 20, likely Bumbershoot), they’ve also added another vocalist to the mix. Christian Wargo, frontman of Crystal Skulls, now flanks Fleet Foxes ranks. His honey-coated voice is a perfect complement to Robin Pecknold’s golden throat; the two voices rising and falling in harmony, meticulously tight, perfectly balanced. In fact, at moments if I closed my eyes, it was tough to discern whose voice I heard. If I thought FF were near perfection back in October, they’ve upped the ante with the addition of Wargo.

Fleet Foxes were the perfect antidote to a cold, wintry – er, spring night. Their tunes enveloped and snuggled and seeped in like a mug of hot cocoa, the tidal wave of harmonies and melodies like a big flannel blanket wrapped around my shoulders.