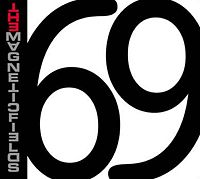 "A Pretty Girl Is Like" by the Magnetic Fields

It took me a while to get into the Magnetic Fields. When I first heard 69 Love Songs I thought a good portion of the music was just downright annoying. In fact I still feel this way, although I'm completely in love with another good portion of those 69 songs. "A Pretty Girl Is Like" falls somewhere in the middle – I don't hate it, but I definitely don't love it.

But the song definitely has something, which is the point of the 69 Love Songs – all the tracks have something special (even if they aren't your cup of tea). A few years ago I made a mix of my favorite 23, while a friend of mine did the same. Our results were surprising as each of us had less than five tunes in common – and some of the songs he picked were downright ridiculous (nobody really likes Punk Love, do they?).

When you really get down to it "A Pretty Girl Is Like" has a great deal that makes it special. Many of the songs on the collection create spectacular atmosphere and mood – mainly because a good portion of them are imitations and homages to a particular kind of love song or a musical interest from Stephen Merritt's past. For me, "A Pretty Girl Is Like" creates an old fashioned European mood. I see a man on the streets of Venice or Paris strumming his ukulele, belting out repeated similes in hopes to woo the ladies passing in the moonlight.

Ah, but there's more… The similies contained in Merritt's lyrics aren't what you'd find in a traditional love song. In fact, they're more akin to a Weird Al tune than something you'd hear in a classic Hollywood romance. According to this article in The Village Voice, the song is a response to Irving Berlin's "A Pretty Girl Is Like A Melody" and acts as a critique on how writers often objectify women with metaphors (Merritt specifically mentions he was reading Ulysses at the time). Merritt turns the song into a beautiful joke by deconstructing a classic stereotypical love song. Whether or not all this information makes me like the song more, I'm not sure… but it definitely makes me appreciate Merritt's magnetic genius.