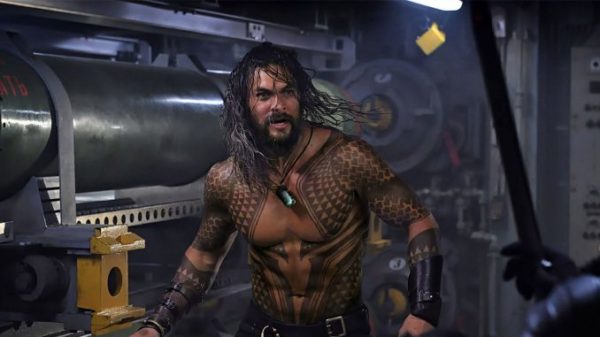 I’m just going to start by saying that yes, Aquaman is incredibly dumb. Yet I was still weirdly into it and ended up getting swept away (HAHA) on its wave (haaaaaaa) of fun.

Right from the opening narration detailing how Arthur Curry’s mother and father meet, you know exactly what kind of cheese-filled action you’re in for. Chill lighthouse keeper Tom Curry (Temuera Morrison) finds a sparkling diamond from the sea washed up near his lighthouse, and doesn’t even blink an eye when she tells him she’s Atlanna, Queen of Atlantis (Nicole Kidman). I mean, you can’t blame him – it’s freakin’ Nicole Kidman in a skintight silver-scaled wetsuit.

But just as we’re settling into the cross-worlds love story of mom, dad, and wee toddler Arthur — *KABLAM!* An army of futuristic soldiers arrives from the deep to take mom back to Atlantis because she defied the patriarchy’s command to marry. This is the first time I can remember seeing Kidman kick some serious ass (and definitely the first time I’ve seen her do it with a trident) and people, I AM HERE FOR IT.

Sadly, after kicking that ass, Atlanna decides she has to go to back to her home in order to make sure Arthur stays safe from the shunned King, because we all know toxic masculinity won’t stop until it gets what it wants. In this case what it wants is to throw Atlanna into a pit of razor-toothed trench monsters … but only after she bears a “true” heir for the throne.

ANYWAY. Arthur grows up to be bulletproof with a set of wicked abs and some seriously killer hair, so he ends up just fine. You know, except for that major chip on his shoulder about Atlantis. So when Princess Mera (Amber Heard) enters the scene with her very specific shade of Disney Mermaid* hair, he’s reluctant to go with her even knowing that his half-brother King Orm (Patrick Wilson sporting a man-bun made of mermaid dreams) is planning to destroy the mortal world after he gains the trust of all the underwater clans and becomes OCEAN MASTER.

Yes. yes. I know. OCEAN MASTER.It’s okay to laugh at that. Literally everyone in the audience did every single time Patrick Wilson said it. And he says it. A lot.

What follows is a battle of brothers full of machismo perfection in an underwater world with incredibly intricate details including weaponized stingrays, killer sharks and fantastical giant seahorses operating as horses, a hoard of terrifically scary trench monsters, armies of crab- and fish-people, an entire sunken Jurassic World, a magical trident that must be pulled from a stone by the one true KING (ok, not really — but kind of) and yes, you heard it right, an octopus that plays the drums.

As if that weren’t enough, there’s also an additional complication with Black Manta, a villain who’s hellbent on revenge killing Arthur for the murder of his father. (This definitely felt like it was just thrown in to prime you for Aquaman 2). And many, many, many, MANY MANY MANY more explosions. Everywhere, anywhere, all the time — even underwater.

But I can’t hate any of it! This films knows exactly what kind of film it is, right down to Wan showing off Momoa’s on-screen smolder by playing a snippet of rockin’ metal whenever he enters the scene. I haven’t laughed this much since the last Fast and the Furious installment.

So now I’ll finish this as I started it: Aquaman is incredibly dumb, but it’s also ridiculously funny, totally unbelievable — and honestly, just too goddamn amazing not to witness. Go on! You know you wanna.

*Seriously. Her hair color was SO BAD. And there’s an entire sequence of her exploring the out-of-water world that is so Little Mermaid-esque it was almost too much.