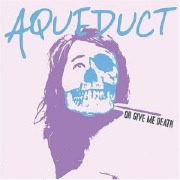 Or Give Me Death

To clarify one thing up-front: unlike most of Seattle and the press in general, I didn't get the first Aqueduct record I Sold Gold at all. Yeah, I liked that one track that was an ode to Guns n Roses, if only compelling for kitsch value. I considered Aqueduct a one-off solo-project-on-overdrive that somehow caught local and national attention ("Hardcore Days & Softcore Nights" appeared on "The O.C." soundtrack). Needless to say, I went into Aqueduct's second record Or Give Me Death a bit reluctantly. Frankly, I didn't think I wasn't going to like it at all.

Or Give Me Death has grown on me, oozing into my skin in a way I never would have expected. The hooks! The horns! There aren't any of those off-topic, genre-bending, massive gaps that often populate a sophomore album, no odd experiments — attempts at "growth" by the artist. There's just pure piano-heavy pop that spans decades of influences, tracing musical timelines from the 1950s through today.

Track on track, the record sounds oddly unvaried, but in a comforting, satisfying way. The album opens with the subdued "Lying In The Bed I've Made," a pretty, lamenting piano ditty that concludes with a chorus of apologies. Then we're straight into a set of three captivating rock songs — "Living A Lie," "Broken Records," and "Keep It Together" — that propel the record forward, melding 1980s keyboards with banging rock n roll drums and wily vocals (at times strained, but forgivable).

Blips, beeps, and whistles pepper the twelve tracks, lending a modern synth element. These oddities add levity to the album's otherwise harsh-reality lyrical content, "People don't change, bitch/ don't even try" ("Keep It Together") and, "It's not living a lie if you're not living at all" ("Living a Lie") offer a glimpse into David Terry's angst. And "As You Wish," with a forlorn late-1950s melody line and backup vocals, subtly masks mega-distressing words (Talk of cutting off feet? Losing eyes? "Good night sleep tight. I'll probably kill you in the morning"?!) Shudder. It may have a double meaning about Terry's love for "The Princess Bride" but it still freaks my shite out.

All-in-all, I'm now fond of Aqueduct. Terry's voice is maybe not the strongest. But it's not as grating as it was on I Sold Gold, and the point is to get these pop songs into the ears of the listener. I, for one, am listening.