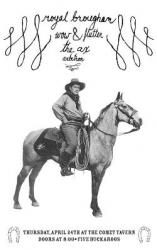 There wasn’t a whole lot of people at the Comet Tavern when I arrived and most the people present had that unmistakeable “I’m in the band” look which didn’t seem to segregate the sparse crowd in any way.

Wow & Flutter from Portland took the stage first. A three-piece band, with guitar, drums & organ/bass, whose simple and well-written songs have a heavier Spoon feel but a little bit of the darkness of the Doors and a post-rocky aftertaste. They held the audiences attention well and are really exciting performers; however, they seemed to limp home and not finish their set strongly. I blame an ill-placed slower number that just took the air right out of everyone’s big wheel tires.

Although the Ax (also from Portland) are a guitar and drums ala the White Stripes, these guys are nothing like the aforementioned duo. I won’t hesitate to say this was one of the most powerful bands I’ve seen this year. It was so LOUD that by the end of their set my beer was flat and I thought I was going to have 20 missed calls from my clothes vibrating. Chris Pierce’s SG is crushing while churning out post-rock to equally intense skins-pounding from Adam Jelsing. Their music is a garage-laden classic metal with a DC-punk feel to the vocal. The riffs come fast and furious and never gives you a moment to get comfortable in a time-signature. The band Helmet kept coming to mind while they were playing due to their solid beat. The two have been playing for more than 10 years and it shows. When the Ax makes the trip up I-5 next time, I better see you there. Remember to bring your ear-plugs.

Local boys Royal Brougham (which features Scotty from the Lashes) bring on the power-pop. They had the partial bar rockin’ and dancing along pretty early into the set. With the normal two guitars, bass & drums so much is possible and while they aren’t the tightest performers, they present solid enough tunes to nod your head or tap your foot. It wasn’t until the end, their final song in fact, that they won over this showgoer. The song is featured on their MySpace page and is definitely worth a listen and likewise these chaps are worth checking out.

After Arbitron’s first song was completed they asked the crowd: “that's a little Nirvana, right?” Oddly, enough the thought was going through my head while they were playing. Actually, though, this band's sound is more relative to the Jesus Lizard’s quirky distortion and noise. Despite their obvious sonic comparisons, Arbitron utilizes modern techniques to tweak an older and unfortunately still (considered by most) un-hip subgenre to the point of making the listener turn his/her head like the old RCA dog.

The night overall felt complete despite the variance from each band as they were presented in order. Indeed, a more suitable order could have been managed but you take it as it comes and I enjoyed everyone’s performance this night.