Are bands "in the t-shirt business"? Should they be? 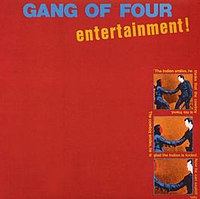 First thing, if you don't read the PDX-based music blog Pampelmoose, you really should. It is run by Dave Allen, the bassist for the legendary post punk band Gang of Four and he writes eloquently about how the music business is changing and what it means for artists (and he's got a lot of great, free, legal mp3s on the site).

Allen is always a thought-provoking writer and this week he wrote one of the most interesting posts I've read in a long time. He said that bands now are "in the t-shirt business" (the profit margins are greater with other merch than they are with CDs). Here's what he wrote:

I am not being facetious when I say that bands are in the T-shirt business as I believe very strongly that as music slips down to zero in dollar value then artists must move quickly to find different ways to make money from their art. [The 'value' of music is based more than ever these days in emotion and much less in dollars.]

…Its the part where musicians begin to squirm, especially the ones who haven’t grasped the notion that free really works. In another part of the presentation I discuss the idea of increasing CD and T-shirt sales at shows by never having prices posted for each item at the point of sale or “merch” table. My thinking here is that those fans that really like the band and are leaning towards buying will ask what the price of a CD is. And the answer should be “how much do you want to pay?” I guarantee that the answer will be somewhat along these lines – “I only have $4,” “I’d like to give you $10,” “You guys were great, here’s $20,” “I have no money.” You should sell your CD at those prices to all of those folks and give one to the guy with no money. They will never forget the experience they had and they will tell their friends that you are the coolest band on earth for doing that.

He then posted an e-mail he got from Amanda Brooks, the lead singer for a Chapel Hill, NC band called Violet Vector and the Lovely Lovelies (who I was crushing on at the beginning of 2008 – and still am). The e-mail said that her band decided to not put a price tag on their items and had more money at that show because of it.

I think he's right. With songs being sold for $.99 on iTunes, making a profit from music sales alone is going to be very difficult and bands that survive will do so because they built a personal connection with their fans.

You should read the whole thing (including the comments). Do you agree?