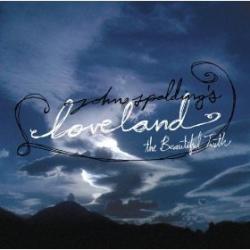 On this night I set aside to write my review of the late John Spalding’s posthumous album The Beautiful Truth, I went for a walk to think about how I was going to frame this review. I was going to focus a lot on Spalding’s obvious love for his life and how this is an album that was shaped primarily by the outlook of a person who knew his days were limited and tried to savor each moment. I was also trying to possibly fit in an “inevitability of death and taxes” reference and make a joke that probably wouldn’t have been funny about nominees to President Obama’s cabinet.

Then, something happened that changed that. I got back to my apartment building and followed people from the Seattle Police and Fire Departments to the entrance way of my building and said that I could let them in the building because the person whose room they were dialing wasn’t answering. When one of them asked for directions to a specific apartment number, I nearly fell over. It was mine.

My roommate was upset when I saw her earlier in the evening because of something that seemed trivial at the time. I left for about an hour or so to give her some space and when I got back I had to let several members of Seattle’s finest into my apartment.

Like millions and millions of other people I turn to music that confronts or confirms my emotional state. When I feel particularly lonely, the two songs I turn to are Liz Phair’s “Fuck and Run” (for the “I can feel it in my bones, I’m going to spend my whole life alone” chorus in particular) and Kelly Clarkson’s epic fuck you to a former lover “Since U Been Gone”. Yet, I don’t ever remember a time when the album I was reviewing was the one I turned to immediately. Three weeks prior, I would not know what music I would have naturally gravitated towards when confronted with the ugly reality of a suicide attempt by someone close to me.

John Spalding was a fixture in Seattle music for many years. I never knew him (and had I, I certainly wouldn’t be writing a review of his album) but I’m positive I would have really loved him if I had. He was a guitar player in bands like Ninety Pound Wuss and Raft of Dead Monkeys and was diagnosed with cancer. He died last November, but before that he assembled a handful of some of the best musicians in the Northwest to help make this album and form his band LoveLand. Members of Pretty Girls Make Graves, Blood Brothers and Minus the Bear played on the record and Matt Bayles (of MtB) produced it.

On The Beautiful Truth, Spalding’s own mortality comes through loudly. There is not a single moment on this gorgeous record that sounds insincere. The first time I listened to this album all the way through, I was immediately struck by the chorus of “Essalife”. It’s one of the best rock songs on this album. Spalding sings about looking “death in the eye” and when he gets to the huge chorus he sings “I want to fight, I want to live, to be unpredictable, to give.” Whether or not you know that he wouldn’t see this record’s release, you know that he’s fighting for his life – and this song is so big that it sounds like he’s going to win.

Another song that deserves special consideration is “Good People”, Spalding’s duet with former Pretty Girls Make Graves singer Andrea Zollo. It starts off with Spalding singing over a sparse electric guitar part about how “there are so many good people who have so much to offer”. When the song starts to build up he shouts “if you don’t got something good to say [sic], keep it to your fucking self”. I’ve listened to that part dozens and dozens of time and each time it reminds me that I don’t nearly tell enough people that I love them. He adds, “I hope you find religion, whichever one is right, I hope you rediscover other people’s lives.” He’s not proselytizing, he’s only saying that each moment is precious and a blessing and we should relish each one.

The Beautiful Truth is twelve songs that conform to the title of this special album. One valuable lesson I learned from several bad business books and working in a corporate culture is that we really can choose our attitude. John Spalding, faced with a terminal disease, chose to fight for his life while making this gorgeous and uplifting rock record. If there is one thing to take from this album it is that rock stars may not live forever but a song that can touch you, can make you think or, yes, that can change your life is timeless.

John Spalding did not live forever but the ideas he sang about here could – and I cannot think of a single thing more beautiful.