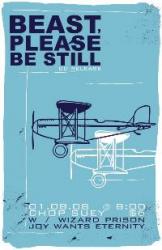 A record release unleashed from Beast, Please Be Still with Joy Wants Eternity

Perking up, my ears prepared for the assault of sound about to hit, tipped off by the clicking of drumsticks. Earplugs would have been a useful accessory at this show, but I would hate to miss an ounce of the wall of sound created by Joy Wants Eternity. All comparisons aside, these Seattle boys build their lush dynamics in their own name.

Sweeping story lines comprised of steep, towering guitars and light, playful keyboards in the valleys between filled the air at Chop Suey. The tale JWE tells is one of incessant hope. Through the thicket of sound there is, well, joy weaved in the nooks and crannies. Even in the downtime of the set, with only four complete stops, their music carries a forward motion; no matter what, life carries on. Their instrumentation projects this message further than a vocalist could portray.
Visuals are not fallen back on either, live they are not much to see. This time no props were used, the last time I saw their performance a winged mannequin stood front center. Nevertheless, they are still damned worth seeing live if for nothing more than the use of venue sized speakers to gain full effect of their lush music.

Perhaps if we were all dosed with acid and put in an art space, Wizard Prison would have faired better. But as we were not, over half the audience left during their set.

Watching Beast, Please Be Still expand over the past year, from a questionable warehouse party (where they played within the Beep Repaired Records Family Orchestra) to this CD release show last Tuesday night, I feel I've found my new favorite local band. In the beginning, the seven piece was more post-rock. They've become a melting pot of jazz, folk, rock, classical, a bit of Irish and French, even some punk. They are post-everything. This is not missed on other's ears, as the unadvertised, Tuesday night, relocated show was quite filled.

Amongst the cacophony, impressive is Beast's members ability to know when to stop and start. They must be a sound guy's biggest hurdle, with two drummers, horns, a glockenspiel, and violin mixed in with the usual band makeup. Originally booked for the Crocodile, the band missed their opportunity to be provided with the legendary Jim Anderson treatment, but the Chop style treated them well.

Their first self-titled release is the newcomer to local Beep Repaired Records, an outlet the musicians have ties in beyond this project. With their new album to showcase one of the fullest sounds Seattle has to offer starting off the new year, I expect to see more of this newcomer.