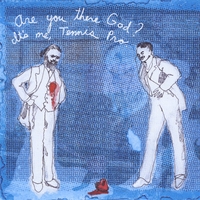 Are You There, God? It's Me, Tennis Pro.

The third Tennis Pro album (and the one with the best title and cover art) opens in a miasmatic soundscape of radio near-silence and very sincere customer service purgatory and then a two-chord acoustic strum. "Such a holy occasion/A multi-global celebration/So much love in the air/My one wish, my one prayer." Lead singer David Drury begs his woman not to break his heart on the day after Thanksgiving, the biggest shopping day of the year. He doesn't want to cry on the bargains, and wants to "fight the traffic and not each other."

It's a softer, sadder — though still pleasantly peculiar — opening to an album that combines the caustic wit of the Violent Femmes with the intricate power pop of a Fountains of Wayne and the ultimate waver bliss of late 80s Posies. The two-note horn-driven bash and snap of "ASVAB" hard-steps a soul shuffle in the next song, introducing the trumpet and flugelhorn of Robert Parker and the French horn of Jacob Hoffman. "College Math" by co-singer and bass player Phil Peterson is a roller-coaster ride of candy cotton-melodic vocals indicting those who try to turn rock music into higher aesthetics. "It's not an art/It's rock and roll." But the composition is both frisky and compelling enough to challenge such an assertion. (The noisy piano bridge with its guitar blasts has the coolest mockeries of a professor's voice since "They blinded me with science!")

The Joe Meek on Everclear-sounding basement symphony "Shelly Gets High" is about a guy who doesn't but has a great time watching this girl "rocking (his) world" when she takes the MBH (monster bong hit), but it is all more about the thrills of seeing good girls go evil at punk rock parties. There are some funny phone messages spread throughout, the best probably being the long message from a casino owner who wants to kick someone off the Blackjack tables but still wants their business otherwise. It's pretty hilarious, because what do you say to a guy like that? How do you return a call to someone who wants your money but wants to kind of push you around and make you feel bad too? More inappropriate customer service. I see a theme here!

"Much Music ain't much at all" Drury complains about Canada, as drummer Sean Lowry and Peterson play tug and war with him on a sweet long outro riff. "Soak that mustache in that beer!" Then there's a great narrative about drawing ponies from ads in matchbooks, as if John Cale's protagonist/victim in "The Gift" wasn't stupid enough to mail himself in a box to his knife-wielding girlfriend but isn't that much sharper (the "Art School Pony" shout and hand claps with the chorus-refrain "There you go again/There you go again/Breaking everyone's heart again" probably have some sort of metaphoric value).

Soul-punk "With Kindness" is a carport threat at a BBQ with a steak fork, beer bottles knocking over the 'Nuggets' box set near the hi-fi. The tenderly melodic "Kimberly" is about a girl picking the weeds in the Beach Boys backyard, around all the pet sound-droppings. Then back to the earlier Tennis Pro finger-snapping mod stylings of "Small Shorts," which has another great guitar-bass-drums dance break-out for the kids. Then the phony spooky witch rock of "DEVIL" and its almost "In-A-Gadda-Davida" hypnotic hook. "Prom 2007" is a rock opera about a girl Peterson met in science class, and ends things all classy and girl-group harmonizing. "In 2007/It would be heaven/I want to hold you forever."

There's a ton more humor and hot playing in this homemade album than Weezer has released in at least three long-players (were CDs "longer-players"?). It makes me want to be a fucked up good kid, a subversive who actually reads a lot of books but does things like dresses up like a cop in riot gear for the "Battle of Seattle" movie premiere.

Which I could see these three guys doing.