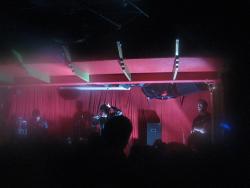 "Thank God we don't have to write about this!" Fellow imaginaries Jeanine Anderson and ChrisB and I exclaimed about our relief of duties while sipping cocktails, marveling at the elbow to elbow crowd at Chop Suey, the sauna quality reminiscent of Girl Talk in Neumo's last year. Our comrade Mike Mess, who was to be the night's reporter, was no where to be seen in the dark masses. Sold out before 10 pm, lines of people were turned away two hours before Toronto's Crystal Castles would take the stage. Straight out of the lyrics for the Fitness song "Day Job," wall to wall club goers were dressed to impress, eyes studying and critiquing over and over.

As quarter past midnight crept up, anticipation clung to the sweat clouds and we wriggled our way onto the dance floor. Suddenly the music was starting, everyone jumping up and down. The room was flooded in strobes, and there she was, the sprite-like singer Alice Glass. I would later learn Mike Mess spent the show dancing his ass off while clamoring to stay up right within five feet of the stage, his date of the evening managing a bloodied lip before the first song was finished. Which brings me here, sharing for you how his account sums up the frenzied floor: the dancing was do or die, and I saw many dazzled faces hurriedly exit throughout the set. This concert is one of many which confirms my believe that people who grumble we Seattleites are not dancers are attending the wrong shows.

Although between numerous heads and seizure inducing strobe, I could not see Glass except for random bounces, I vividly thought if she could head up such an outrageous dance party, she has to be doing something right. Several accounts share she looked downright evil throughout the set. CC's other half, electronics wizard Ethan Kath, churned out at some points what sounded as though he were playing an actual Atari rather than mixing, particularly for the extended opening of crowd-pumper "Alice Practice" and "Air War." Filling out their sound was an accompanying live-drummer.

Feet were stomping on feet, the crowd was like a relaxed mosh-pit, no punches thrown or shoving endured, but the pulsing crowd swayed on unstable thumping legs. In front of me were two radiators of guys, both about 6'5'', unbelievably one wearing a sweatshirt, flannel on the other. When asked how he could possibly hold up when I was sweltering in a tank top, he humored me: "I need to lose weight!" More power to him, after an hour of sweating pounds off, the cold outside was a salvation. Joined by other drenched dancers, I found myself in a crowd feverishly fanning ourselves with our shirts. Unfortunately, just as I caught a second wind, CC abruptly ended the night without a word.

Like a late night booty-call, Crystal Castles were hot and heavy, giving Seattle what we wanted with no small talk and cleaning up before either party felt obliged to entertain further. Except like a good lover, I'm sure we'll be calling for more.