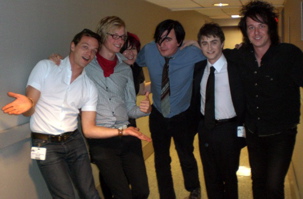 I had to share this picture that just arrived into the imaginary inbox. Two worlds collide!

Daniel was heard saying "Very very cool…the most entertaining [band]…they're great" (or at least that's what their publicist is telling us).

A video from the night (he does have a Harry Potter glow doesn't he?):

Want to shake Art Brut's hand? You might see them over by the kettle corn stand at Bumbershoot… or in your town soon:

And one last thing I've been wondering about. Do you think that JK sent Daniel the last HP book before it was released? Is that a fringe benefit of playing HP on screen? And if so, did Hermione get one too?