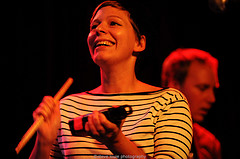 A solid night of indie pop with Love Is All, Vivian Girls, and Nodzzz

I set out last Sunday to Nectar with a night full of possibility. My show companion wanted to get there early to check out the opening band, Nodzzz. Neither of us had heard them before, but people who had seen the tour previously had been telling my friend that they might be the best band on the bill. So, we diligently got there early.

Upon walking in, I could tell that this was definitely the show of the night, as I instantly ran into tons of people I hadn’t seen in forever and didn’t expect to see at the show. As soon as Nodzzz started, I could tell I was going to like them. Despite their terrible name, their shambolic crash pop sound with songs usually under two minutes reminiscent of a messier Feelies was right up my alley, and I spent their entire set dancing about.

Up next were Vivian Girls, who I mistakenly suspected were headlining the show because of their current buzz. I managed to sneak in the back just as they started. I was pleasantly surprised that they sounded much more like Tiger Trap (i.e. – faster, dancier poppy punk) than I had imagined. Their self-titled release that everyone has been talking about is so drenched in thick reverb I’ve had a hard time making it through, and it was nice to see that Vivian Girls were much more energetic and personable live than I had previously imagined. (Side note – while their set did include a Beach Boys cover, they did not play their slowest song “Where Do You Run”, the one that KEXP has been playing constantly that always reminds me of Black Tambourine.)

Following Vivian Girls’ fun set, were Gothenburg’s Love Is All. I’ve previously mentioned how much I adore these Swedes, and they did not disappoint. They opened with my current song du jour “Wishing Well” and continued the on with their rousing keyboard and saxophone soaked dance pop sounding like X-Ray Spex meets the Clean. I especially enjoyed their brand new song about the dangers of waking up too early (like hitting your head on a shelf and slipping in the shower). Maybe it’s just my fascination with Swedish folk, but everything they did was absolutely adorable and I had a smile on my face the entire set.