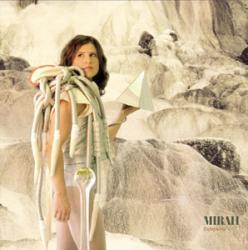 Mirah has a new solo record, (a)spera, her first since 2004. That’s only partially accurate, though: fans of the Portland-based singer-songwriter have not exactly been starving for new material over the past five years. She released a two-disc set of remixes, made a multimedia presentation on the lives of insects and then released a rarities and b-sides disc last year. I would even go so far as to suggest that by being so prolific between albums, it makes (a)spera that much more palatable.

Very few singers have a voice that approaches Mirah Yom Tov Zietlyn’s. She has a gorgeous, delicate voice that is intimate. I’ve seen her play live a handful of times and listen to her somewhat regularly on my iPod, and in both environments, as others before me have noted, she sounds like she is singing directly to you. With the range she exhibits, always hitting the right tone with her harmonies; it can be a thing of pure beauty. I’ve heard more than a handful of people say to me that they enjoy her voice so much that they would be willing to listen to Mirah sing from a phonebook. With (a)spera, she sort of does.

That might have been a little unfair but there is little on this record that is memorable. After giving it two complete spins, I still can’t identify one memorable lyric; there are only two songs that really have a melody and hooks are far and few between. For most of the record, the instrumentation is sparse and limited. You’ll hear string instruments or an acoustic guitar here and there, but the production here is generally so limited that it (by design but not to its credit) is to focus exclusively on Mirah’s harmonies. Gone are the electronic flourishes that were much more prominent over her previous albums. This record is certainly not as playful as the previous albums, and with song titles like “The World is Falling” (and a real-life stock market that echoes that sentiment) and “Gone are the Days”, there is little cause for optimism. Still, though, “a spera” translates from Latin as “to hope”.

This is not a waste, however; there is still also a lot to enjoy on this album. On “Bones and Skin”, she shifts from singing straight-forward throughout the first two thirds of the track and then changes tone and adds an echo that fills up far more sound; while sounding more innocent and playful at the beginning to a chilling conclusion. The production throughout (a)spera does bring out each instrument wonderfully, so it sounds way too polished to be a bedroom recording (which is a good thing), it’s just that those sounds don’t have enough density to really feel complete.

“The Forest” has the most complete sounding melody, which starts to kick in after about 45 seconds. It is a big, epic song, which is unlike most of everything else in Mirah’s catalogue. It is also my favorite here. There is an electric guitar that fills in the vacuum that too little melody and (arguably sometimes) too much harmony leaves elsewhere on (a)spera. “Gone are the Days” follows “The Forest” and makes for the most complete 7 minutes on this album. It has a horn section that sounds welcome in the middle of the record.

As a whole, (a)spera just exists. It’s there and Mirah sounds as good as she ever (and usually) does. There are a handful of talented artists that make cameos here, like singer-songwriter Tara Jane O’Neil and Chris Funk (of The Decemberists), but the album is carried by Mirah’s voice, almost exclusively. Overall, I liked the record: it’s nice to listen to but it doesn’t have the same memorable moments that 2004’s C’mon Miracle and 2000’s You Think It’s Like This But Really It’s Like This: catchy, pop gems with clever lyrics that you want repeat and songs you want to play over and over again. Ironically, I though Mirah’s harmonies were obscured on Joyride, the remix collection. Maybe there’s a lesson to learn here about being careful of what you wish for or being grateful for what you have. Mirah is a Northwest treasure who has a beautiful voice – and that should not be dismissed. I don’t want to give up completely on (a)spera, I just want to listen to the older stuff first.