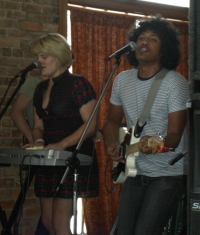 Athens PopFest 2007: Day 3 with Fishboy, Cars Can Be Blue, Daniel Johnston and more…

Black Kids were the surprise of the PopFest. And I'm not alone in my Black Kids adulation–everyone in my 8-person group was screaming "I LOVE BLACK KIDS" after their show. They were the opening band on this, the final day of the PopFest and their quick wit banter was disarming and hilarious. Their songs were catchy and well-thought out without being contrived. Visiting from Jacksonville, Florida, the fresh-faced fivesome played a packed set of songs (My favorite being "I underestimated my charm again") and even braved a killer Clash cover.

The two keyboarding ladies danced without abandon, and at one point Ali Youngblood ventured out into the audience with her tambourine and skipped around the elated audience. After the show, the band gave out a bunch of free burned cds of their demos – which unfortunately didn't really capture the magic of their live show. The beguiling Smiths' guitar, unaffected Robert Smiths vocals of lead singer and guitarist Reggie Youngblood, cool cheerleader girl vocals with a zealous rhythm section was lost to less than ideal recording quality. If you listen to them on MySpace, you'll hear some reverb and over synth'd versions of the songs… which in no way illustrate the energy and songsmanship of the band live. This doesn't diminish my urge to evangelize Black Kinds and I still crown them the PopFest highlight.

Jerk Alert were next up. They started their set with a loud cacophony of sound – which I assumed was just a way to grab our attention. Actually, that Bratmobile screaming, fuckpunk loud monster sound continued through the whole set. I retreated to the back and gathered my thoughts during this set, though it should be noted the lead singer wore a spanking red velour outfit.

The electro-melancholy trio The Pains of Being Pure at Heart were part Suburban Kids with Biblical Names, part John Hughes soundtrack, and as the lead singer's t-shirt suggested, part-Belle and Sebastian. Their songs nervously charmed with shy boy distain for encounters of the interpersonal ilk and the midi beats harkening to the bedroom pop they likely pulled influence. The delicate combo was quite delightful.

The Visitations set rounded out the day portion of the Saturday shows and started off with a guy, a guitar and a posterboard guerilla face over the microphone. It got less interesting from there and no matter how much the promise of having the fellow joined by members of Red Pony Clock intrigued us, we needed to head out for our DIY Athens tour (which included stops at indie-rock historical spots – Weaver D's anyone?).

The evening portion of the last night of PopFest started a few hours later at the 40 Watt. Red Pony Clock took the stage and before picking up their instruments, all the guys took their shirts off. The 11-member crew wore coordinated outfits (the boys topless and in matching swim trucks, ladies in striped tank top dresses) and broke into their trademark indie mexicali dance party songs. The group sported several brass (trumpets, trombones), oboe, clarinet, drums, bongos, accordion, guitars, bells, among other instruments.

Lead singer, etc. Gabe charmed with the wit and ended the set with a "Helicopter Shirt Dance" to the song "Don't Forget Who Your Friends Are" which inspired several male audience members to take off their shirts and swing them around like a helicopter through the song.

Denton, TX's Fishboy were next – and by song three they were a favorite of the fest. The band's onstage antics and banter, quick, concise songs and spazzing keyboardist left us breathless. They have a TMBG meets Jawbreaker vibe with nothing slow or subtle about their songs.

They charge forward with literary whimsy and fast-paced guitar rifts and even took their live energy into the physical realm by smashing a DVD player at the end of the set. I've loved their song "Woodward Ave" for some time (and the new songs they recently posted to the website are quite addictive as well) so it was no surprise when the quartet's set left me counting down to the release of their new album, Albatross: How We Failed To Save The Lone Star State With The Power Of Rock And Roll in the fall.

Next up, it was payback for Bunnygrunt. The band has become infamous for supplying multiple rounds of shots to their friends on stage (see Tullycraft's PopFest show in 2005, and the earlier Casper and the Cookies show for evidence), so they were bombarded this time rwith six rounds of shots during their set this year.

Being troopers (or at least well-practiced in the art of shots), they persevered and the only slip up was during banter when Matt said "I'd thank to like…" They blazed through a Warren Zevon cover, which they sup’d up by adding a horn section made up of members from Hat Company and Red Pony Clock. They ended the set with Poison Control Center's "Love is the Answer" and it’s accompanying dancing and singing along a mass of band and indie pop folk on to the stage. It was the best Bunnygrunt show I've seen thus far – not sure if that's due to their songs or their shots.

Everyone had been counting down to the set by imaginary favorites Cars Can Be Blue. Earlier in the night the pair had promised a big ending, so as they made their way through their catalog of non-risque tracks (they were keeping it somewhat clean this night) our anticipation grew. Notable new songs dotted the set included "Coat Tails" which finger points at the locals who drop names to feel important with lines like "I know that you are friends wiht all the right bands" and the self-explanatory "Merch Song" In honor of the PopFests organizers Happy Happy Birthday To Me Records, they covered Cracker's "Happy Birthday to Me."

The finale came with a high-reverb cover of "Purple Rain" and featured Nate and Becky spewing fighting words to each other via a huge newspaper board pad. The song ended with a shower of confetti and balloons dropping from the ceiling (someone was good at the game Mousetrap to set that contraption up!). They didn't disclose when we can expect the next album or tour… but fingers crossed it is soon.

Dark Meat, Dark Meat, Dark Meat. Ah yes, the Dark Meat. The hippy army took full advantage of the stage and blasted out the mayhem with at least 20 folks dark-meating it up. As we've covered in the past, they are an elementary music class production come jam session that fills up a room with sound and are a force to be reckoned with. The songs are filled with mayhem but hints of “In the Aeroplane Over the Sea” trumpet with Polyphonic Spree group vocals / screams are hard to ignore. Oddly, with the room temperature at near boiling, the havoc they reeked was a nice charge to the party and I think I left the fest with a keen appreciation and, dare I say, understanding of the band.

Japan's Elekibass filled the room with as much good will and cutesy charisma as a Hello Kitty convention. The audience, members of my posse included, were enraptured with their uber-happy pop tunes to the point of demanding an encore.

Daniel Johnston took the stage and divided his set up into three even pieces. The first part was him solo with his guitar humbly strumming through his catalog. During the second movement, he was joined by an acoustic guitarist who played while he focused on vocals and mesmerized the audience into silence. Throughout the set, the only peeps made were when the masses riotously cheered between songs.

The third part, arguably the most engaging, Daniel was joined by Casper and the Cookies who acted as his back up band. Not so surprisingly they started with "Casper the Friendly Ghost" and with "Hey Joe" soon following. Not much could have prepared us for when Daniel asked the audience what song we wanted to hear, to which he said, "I bet you want to hear this one" and launched into "Speeding Motorcycle." This version had an easy listening feel and lulled us all into a contented cocoon state.

He ended the set with "Gonna Rock this Town Tonight" which included the addition of Elekibass on stage. The sing-along climaxed into a sweaty riotous crowning point with everyone worked up into a frenzy of rock. Whew. Athens PopFest, a frenzy of rock.