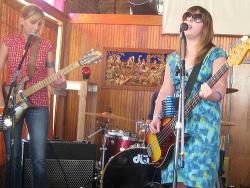 Playing first (2pm) on a very long string of bands is always a difficult feat (especially when most folks had been out until 3am the previous night), but St. Louis’ That’s My Daughter brought their Ramones meets Fastbacks meets Bunnygrunt (the band featured Mario-grunt on guitar and guested Matt-grunt on lead vocals for a song) meets Buzzcocks performance to 11pm in a seedy, dark club level, complete with a beer can holder attached to the microphone stand. Needless to say, even my uncaffeinated head was incredibly impressed.

Up next, on the very opposite end of the sonic spectrum were Denton, TX’s Little Birds. Featuring a member of Fishboy, a touring member of Red Pony Clock among other fine Denton folks, their beautifully haunting Neko Case overtop orchestrated indie pop set left me with goosebumps and the desire for more. Here's video of Little Birds from the show:

My desire for food and caffeine overtook my will to see more new music, but I made it back in time to catch a bit of Panda Riot, whose blippy female fronted sound reminded me quite a bit of a softer and more shoegazey Broadcast (in a good way).

Due to having to load in for my own band’s (Patience Please) 40 Watt set, I missed all but half a song of Averkiou, which I was sad about because their mid-90’s noisy power-pop sound was right up my alley.

Later that night, the first thing I caught was Bunnygrunt, who year after year are always a highlight. Their sound of the Buzzcocks meets Blondie always warms my heart and makes me shake my ass and jump up and down a lot (even in heels). (Side note – my bandmates and I took over the Seattle contingent who in past years had showered Bunnygrunt with midset shots and brought Bunnygrunt two rounds of shots on stage. They noted the quality had greatly improved from last year.) 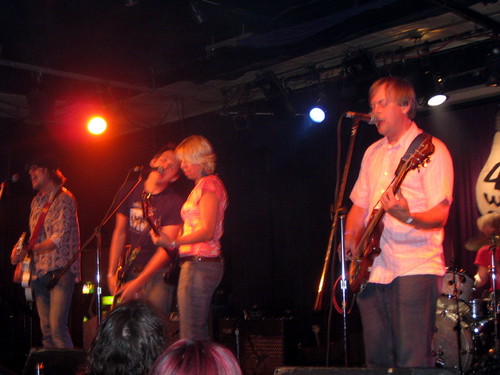 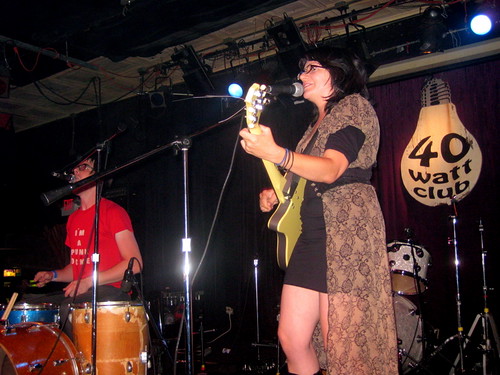 Cars Can Be Blue photo by Jon Manning

Next up was a perennial Athens band favorite, Cars Can Be Blue, who played many songs off their new record Doubly Unbeatable, as well as many classic favorites off of their first effort All the Stuff We Do. They’ve tightened their set quite a bit, and very much lived up to their title (or so friends and I decided) as this generation’s even dirtier Vaselines. Their set also included a cover of Peter Bjorn and John’s “Young Folks” featuring Jason and Kay from Casper and the Cookies and members of We Versus the Shark. Here's the video of their song “I Hope You’re Hurting Now”:

Sometimes Athens Popfest is more about having an adventure with your friends than watching the scheduled bands, so because I’d missed Tom Gorrio from Baby Calendar’s set earlier (he was back to back with Cars Can Be Blue), he played a special show for a few friends in the 40 Watt parking lot, filled with some old classic Baby Calendar songs, new solo songs, and even a jam with an older gentleman passerby. (Note – if anyone has video of this, please send it my way!) 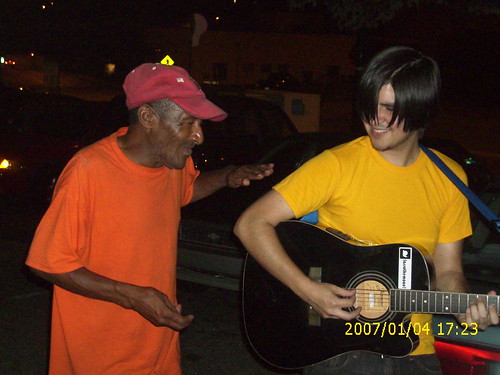 Tom Gorrio photo by Eric Boogiepop
(ed note: Yea, I don't know why Eric's timestamp is on this photo and why it is set for 18+ months in the past)

I’ve never cared at all about Dark Meat, besides the fascination that a band like that could be on such a huge record label like Vice, so I missed them. But, this is what their set looked like for those that are curious. 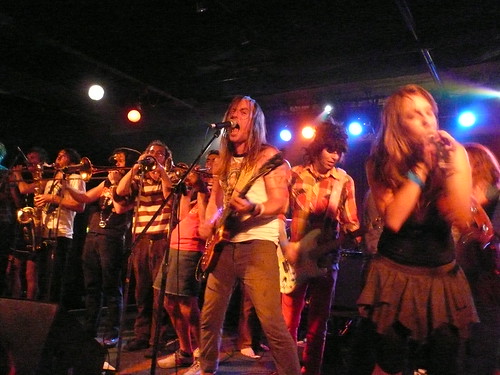 Due to personal reasons (and maybe some slight intoxication), I missed most of Roky Erickson (my dad’s going to be pissed), but there was a point when I heard the opening chords of “You’re Gonna Miss Me” and I ran into the 40 Watt screaming “Hey! I like this song!”. Dark psych rock isn’t really much of my thing, but from what I can saw (and from what I heard from other folks), it was a great set. I also heard sort of a hilarious rumor from the guy who served me breakfast on Sunday that Roky actually thinks he is a vampire, and it’s not just that song.