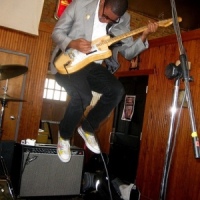 I arrived at Little Kings properly breakfasted and caffeinated (thanks to the fine Athens establishment that sent me with a free to go cup of unsweetened iced tea!) and perfectly on time. The first band had cancelled so, the next band, Tendaberry, started a bit late. I’d talked to a friend earlier, who’d told me that they’d sound checked with R.E.M.’s “So. Central Rain”, which happens to be a favorite of mine. My interest was piqued, but I still went in completely unprepared for what was about to happen.

The lead singer immediately started screaming lyrics of “So. Central Rain” acapella, followed by “This set is dedicated to Michael Stipe and Kanye West,” followed by more acapella screaming of a Kanye West song (forgive me for not knowing which one), which then kicked into a set of soulful chorus-soaked punk that at this point seems nearly impossible to describe accurately, but left my jaw on the floor and my face permanently smiling.

I saw shades of early 80’s Elvis Costello, a more punk and less funky version of Prince, Gang of Four, and crazy post-punk thrash, all caressed together with a beautiful and powerful voice by one of the most charismatic frontmen I’ve seen in ages (there was a moment he jumped into the audience and soloed guitar with his teeth about 6 inches from my face). At one early set break frontman Jonathan joked “We’re the real Black Kids!” to which the drummer replied with a classic drum fill. Mark my words, you will be hearing plenty more about Tendaberry in the weeks and months to come. Here’s video of their cover of the Buzzcock’s “Orgasm Addict.”

Following a band like Tendaberry must have been a daunting task, but Boston’s One Happy Island played a lovely set of orchestrated ukulele twee pop reminiscent of early Lucksmiths and fellow New Englanders the Smittens with songs about parties and unicorn temporary tattoos. 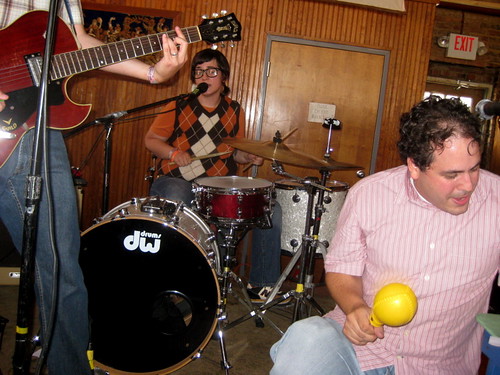 Up next was one of my favorite new pop bands, Toledo’s the Hat Company. Lead singer Kyle Bliss began the show with an acoustic guitar in the audience with a short pop ditty with lyrics like “midst of summer lost my swimming trunk/what a bum/a bum bum bummer.” As soon as Bliss took the stage the pop sonic assault began.

I’ve watched this band grow up over the years from a fun twee band into the bastard children of Brian Wilson and Dean Wareham, complete with gorgeous melodies over tons of fuzz and feedback. They played many songs off of their upcoming concept record Amber Brown, which will hopefully be out by the end of this year. Here’s a video of their song “If It Ever Rains Again.”

Following the Hat Company was the band that many folks considered the main attraction: Fat Planet, which featured Elephant 6 founders Robert Schneider  (Apples In Stereo), Bill Doss (Olivia Tremor Control, Apples In Stereo), Will Cullen Hart (Neutral Milk Hotel, Circulatory System), Peter Erchick (Olivia Tremor Control, Pipes You See, Pipes You Don’t) and Charlie Johnston (The 63 Crayons, The New Sound of Numbers) performing with their high school band for the first time in many years. (Jeff Mangum of Neutral Milk Hotel fame was rumored to be joining them, but he never did.)

They took the stage about 45 minutes late and fussed with microphones for a while (figuring that if they just had a few stage mics placed in odd places, that it should properly amplify two acoustic guitars and some random percussion). Somehow, between all of them, they could only come up with one real acoustic guitar, and a child’s guitar, which they flip flopped between calling “the shitty guitar” and “the awesome guitar.” 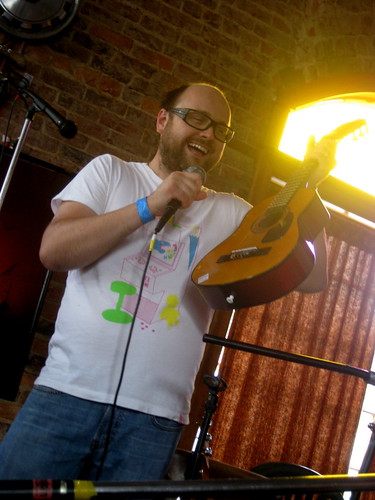 Once they got down to playing songs, they chose a few Apples In Stereo songs (“Skyway” and “The Rainbow”), a few Olivia Tremor Control Songs (help me out with song names if you were there!), as well as a few songs they wrote decades ago (“Mercury Mother” and “Warm Milk and Chocolate”). Mostly, it was all about watching a group of old friends have a blast and goof off in front of a more than willing audience. All in all, it was very charming and entertaining for even the casual Elephant 6 fan. Here's a video of the group playing the Apples In Stereo’s “the Rainbow.”

And that was just the "day" portion of the festivities… check back for the recap of the evening's festivities.