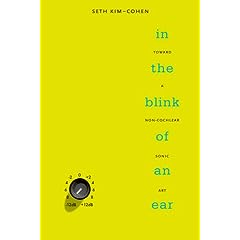 You know Animal Collective, Grizzly Bear, Dan Deacon and other great indie innovators are getting textural and contextual inspiration from somewhere other than what’s reviewed in Rolling Stone or Pitchfork, but where? In The Blink Of An Ear, written by Seth Kim-Cohen, subtitled Toward A Non-Cochlear Sound, might put you on their same journey outside the boundaries.

A cochlea is a the snail-shaped inner ear which receives sound, and this book is all about how we receive sound and what we do with it in our minds. The music business is an industry built on sound, but there are many people who build sound from industry for a livelihood and legend. Kim-Cohen is the Director and Assistant Professor of Art and Theory at the Institute for Doctoral Studies in the Visual Arts, has taught art history at Yale and the Pratt Institute, and has had many art showings in places like Tate Modern and the ICA in London.

Why is an academic and artist like this of interest to the music fan? Well, alternative rock has its roots in the art school scene — the Sex Pistols and Talking Heads and Superchunk who have all done songs about the milieu, and bands like Wire and Gang of Four and many others would have never existed without it. That’s where they formed (in their physical lives), but it wasn’t just a location these young, potentially innovative people obsessed with change and culture came to, it’s where a Brian Eno would teach the mutual joys of ambient noise and doo-wop, as recently described in the Wire Pink Flag 33 1/3. It’s where ideas met sound, and that’s Kim-Cohen’s living and playground.

Speaking of those books, In The Blink Of An Ear is published by the 33 1/3 publisher Continuum, and though my knowledge of Alvin Lucier and La Monte Young has been mostly strained in conversations with underground cassette fans and Velvet Underground obsessives, I was engrossed by the stories of breakthroughs of dogged sound experimenters Cage and Fowler, whose works are analyzed along with those of Muddy Waters and Bob Dylan. The author spends a lucent chapter circuitously studying every note that went into the song “Like A Rolling Stone” by Bob Dylan, from the jarring changes of a tune semi-spontaneously crafted in the studio shortly after its creation (something rarely done these days), and how that’s juxtaposed with the specifically lo-fi works of Pavement, Sebadoh, and Guided By Voices.

Kim-Cohen has been studying sound professionally for a long time, yet never hesitates to admit that he might not know the possibly flexuous intentions of the artist he discusses, but brings that in for discussion as well. His writing on the gritty expression in the noise-pop of the Silver Jews is as spunky as anything on P4k.

Aligning his reviews of sound with texts by Derrida, Lyotard, and other post-modernist philosophers, avant-garde performance seems a strange twin with pop culture in its evolution. Again, my favorite example of this is how he assays “Like A Rolling Stone,” where the opening kick drum and snare blast is an “opening onto the past and into the future.” The story of an accuser who both casts his subject as “invisible now” yet has “no secrets to conceal” is a “semantic fabric” made by an artist who was aware he was becoming an author of real history.

Kim-Cohen even contacts Greil Marcus, who wrote a whole unshakable tome on the sociological and artistic of this one song himself (and it’s really good! And this book even adds to it!), to debate the existence of the tape splice he hears at the start of the fourth verse which Marcus doesn’t mention. I won’t elaborate on that drama, but Kin-Cohen has scrutinized the pacing of the song so well he can sense the nerves of the players backing Dylan and exactly when they knew they had it in the bag enough to back off a little.

There will probably never be a 33 1/3 series for the sort of Seattle music fans who guzzle the noise at the Decibel festival and other music-expanding events, but at least Continuum has hired a sagacious and savvy author to craft an anthology of works that has me running to one of our favorite record stores, Wall Of Sound, to plunder some phonics I’ve missed. Bravo!