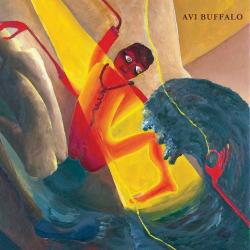 Avigdor Zahner-Isenberg was a Long Beach skateboarder who played a solo set at a local vegan restaurant. Eventually his fear of damage caused by “shredding it” led to long hours making noise out of his guitar, the kind of noise boys in their late teens particualrly love. That’s when it all came together for he and collaborators Rebecca Coleman (keyboards/co-vocals), Arin Fazio (bass), and drummer Sheridan Riley. It so happened though that their music caught the ear of Elliott Smith and Emmylou Harris engineer Aaron Embry, who heard the (ahem) “old soul” in the freaky kid and helped him make the first ten songs on his “self-titled” (via moniker) debut sound like a missing masterpiece of L.A. suburban graffiti-garage pop.

Out on April 27, 2010 via Sub Pop, expectations for Avi Buffalo are already intense, due to first vinyl single “What’s In It For?” a luxurious near six minute strip of sweet sizzling summer psyche-pop-folk. A slacking ode to a girl who is “tiny and has lips like two piecesof bacon” from a really smart and smart-ass boy who has raided his parents LP collection as if putting together a Beastie Boys album, it sounds like the longest best day with the sweetest girlie backing vocals sweetening the lassitude, that begins by trying to mess up a girl’s plans and become a “cold tear in her rawhide.” “What’s in it for someone with nothing to do?” {listen}

The rest of the album isn’t nearly as anthemic, but its combination of eternal teenage Beatnik horn-dog confessionals and Beck-style lyrical improvisation make “Five Little Sluts,” “Coaxed,” and heady, lugubrious closer “Where’s Your Dirty Mind” more literate than licentious. Avi and his band have a hands-on approach to the abstract, and his Freudian-dream imagery melts well into his expressionist guitar playing floating all around loose, inspired, near-jam rhythms from Avi Buffalo.