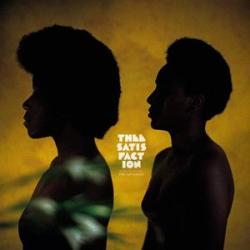 THEESatisfaction create Blue Note-kissed hip-hop bliss from "your limbs to your Tims." Tacoma-grown Stasia Irons and Seattle-Hawai'i reared Catherine Harris-White, the two who scribe and dance and capture their electronic sound-scapes as THEESatisfaction, have been hearing their talents cheered on for a couple of years now in Seattle. It was the next flow, and every show they performed here (or say in NYC with collaborator/guest stars here, Shabazz Palaces) their positive vibes, open queerness, black pride, and devotion to the musical-esoteric inspired praise and eyes and ears wide open.

Their self-released mix tape beginning is synonymous with SP's Ish going to stores like Sonic Boom with homemade CDs, starting with 2008's That's Weird. I've somehow avoided their hotly-demanded demos, mostly because they first go blazingly fast through the ranks of their fan-legions. So, probably like many of you reading this, awE naturalE is the first in-depth recording I've been able to sit back and absorb over repeated listenings, and frankly I'm glad I got to hear how they executive produced it on Sub Pop's $$ and Erik Blood's bold mixing. Crisp call out "QueenS" or terse, tense "Bitch" sound like soul-assertive classics from savvy, adult music albums crafted from poetry and soul singing, chanting, rapping; and groove, handclaps and percussion pummels from any decade in the past forty years. But really, it sounds like the origin elements of a more blessed future, bringing along a sublime LP collection from 1971-73 and a bit of Detroit 1985-88.

Ish and Tendai are here, on "God" and elsewhere, and they're welcome guests. But it's a tight record, not one full of digressive asides or meandering skits; those rap days are long over. Every song cooks in the sequence, full of lyrics evoking empathy through suffering, grace in adoration, conflict resolution through confidence. The music has always been thing thing for my friends, especially those burned out on most hip-hop — this is its own dimension of sultry, smoky, Afrofuturism.