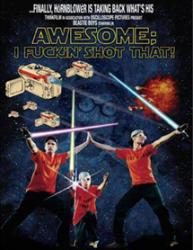 Awesome; I Fuckin' Shot That!

By now you've probably read about the concept behind the first Beastie Boys concert film, Awesome; I Fucking Shot That! Fifty fans at a 2004 Madison Square Garden concert were each given a camcorder to record the proceedings from their seats while obeying one simple rule — don't stop shooting. All the footage was compiled and edited together to make one complete concert film depicting the show from various perspectives at The Garden. In theory it's a very cool idea and definitely a very Beasties thing to do, however, in practice the results might not have been exactly what director Nathaniel Hornblower (a.k.a. Beastie Adam Yauch) would have liked.

Taken as a whole the film is a great representation of a Beasties concert, and for those who were lucky enough to see the three funky Jews from New York perform on their Pageant Tour at KeyArena in September of 2004, this concert will cover familiar ground. There are some brilliant close-ups of DJ Mix Master Mike doing his thing, and a lot of the visual style mimics the way some of the Beasties' videos were shot.

The film excels when the steadicams that were positioned on the DJ both and some of the more professional-quality footage that was shot by fans with closer vantage points is edited into the movie. What really holds it back is the very same concept that makes this a quasi-revolutionary film. The fans shooting the concert aren't professionals, and some of them are way up in the nosebleed seats, making for jumpier footage than The Blair Witch Project and way too many shots in which the band isn't even visible.

Also, with the one rule being "don't stop shooting" there are some pretty funny moments captured on film. For example, the one fan that takes his cam with him while he takes a bathroom break. Sure, watching a guy pee from a first-person perspective isn't the most riveting piece of cinema, but it was pretty damn funny and it broke the monotony of constant jumpy concert footage.

As for the concert itself, all the classics are represented in the set list, including "Paul Revere," "Pass the Mic," "Time To Get Ill," "Shadrach," "Hello Brooklyn," "Brass Monkey" and others. It was a pretty solid set, but if you ask me, "Paul's Boutique" was highly underrepresented. Bottom line: if you're not a fan of the Beasties you're probably not going to like this film, and if you are a fan you'll likely eat up every minute of it.

Anyone who was lucky enough to see the one-night-only screening of the film March 23 also got the treat of see the mockumentary A Day In The Life of Nathaniel Hornblower, starring David Cross portraying Hornblower. Let's just hope this 30-minute gem makes its way to the DVD release of Awesome, because watching Cross traverse the streets of Brooklyn wearing lederhosen and cross-country skis is some high comedy.

While at first you may need some Dramamine to get through the first few minutes of Awesome, the Beasties still manage to prove they are the illest motherfuckers from here to Gardenia, making this concert film definitely worth ch-ch-ch-checking out… and worthy of many other bastardized Beastie lyrics.