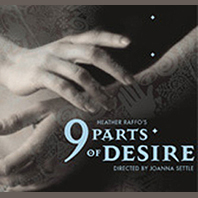 "How 'smart' is this bomb if it bombed a painter?"

Based on a series of interviews she conducted over eleven years, Heather Raffo's dense and shattering multicharacter monologue play 9 Parts of Desire takes us deep into the hearts and minds of Iraqi women. Performed beautifully by Najla Said (in roles originated in the sold-out Manhattan run by Raffo herself), the characters' voices offer candid reminders of the struggles of war and the daily tribulations faced by women connected to that troubled part of our troubled world.

The title refers to refers to an Islamic sage's comment about God dividing up sexual passion — women got nine parts while men got only one — and the play's nine composite characters form a lovely cross-cultural documentary mosaic of experience and wisdom. Among the scrupulously detailed subjects are an elderly London academic, a bomb shelter tour guide, a sprightly street peddler, and an N*Sync-lovin' Baghdad teen. Raffo even echoes her own Iraqi-American dilemma with a New Yorker who can't tear herself away from incessant war news on CNN.

Najla Said is simply a marvel, embodying each character with quick, subtle transformations and a fearless tenacity that's often breathtaking to behold. Director Joanna Settle guides the text with an appropriately gentle touch, keeping realism the guiding force behind the production, and Antje Ellermann's appropriately textured scenic design keeps us tentatively grounded within the palpable sense of danger. (The Rep's lovely and underused Leo K. Theatre is perfect for the intimate nature of 9 Parts, a sharp contrast to the flashier, crowd-pleasier Private Lives next door in the big-ol' Bagley Wright.)

"You have our war inside of you, like a burden, like an orphan," says Layal, a gleefully hedonistic artist and the most compelling, emotionally-walloping of Raffo's characters. "And we tether you to something so old you cannot see it. We have you chained to the desert, to your blood." Both oppression and deliverance come with unbearable costs, and in the end, 9 Parts of Desire is as much about "us" as "them".