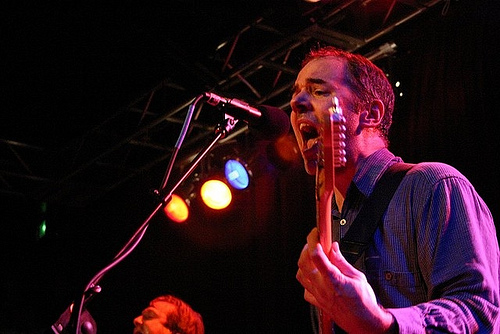 It goes without saying that I love the Wrens — if you know me, you know that this is a primary fact in my life, like how I need glasses. And I know, it's just Wrens, but it's all awkward to say, "I love Wrens". It sounds like I'm talking about little birds, which I don't mind at all. Wrens, in any form, are great. But Wrens, capital W Wrens, Charles and Kevin and Greg and Jerry Wrens… talk about top albums ever, top bands ever, worst stories to recount about geeking out horribly talking to a band ever, and best shows I've ever seen (ever).

I mean, seriously. Look at how excited I'm getting about this post.

Yes, that photo is from the Yule Benefit at Neumo's in 2006. No, I did not live in Seattle yet. Yes, I coordinated a trip out here to coincide with their two-night engagement. Yes, I am Ric Nunez, Superfan, with Sharpie in hand.

A-hem. How about I get to the point of this post?

Check this out. It's new. All kinds of new. I haven't even looked at the whole thing yet. And it's all via the note I got last night, from when I did myself a favor way back when and got on the mailing list. Before I go track down the new song they're talking about, I thought I'd take a moment to share:

How are you? How were your holidays? The previous few years before that? Good, good.

I know, I know…you signed up for this thing like 5 years ago, when you were young, with-it, and actively involved in keeping up on other young, with-it people in bands. Like us. (we can hear the laughter through your inbox.)

Now everyone’s a little older (I just threw a hip hitting the space bar), and receiving mail from us is like getting notice that your My Two Dad’s fanclub membership is in need of renewal. Well it is.

Nevertheless, we continue to actively stalk you, dear reader, with an email update sent out like clockwork ever year or so. Maybe more like calendarwork.

But with brevity as our theme, really just writing to say that:

– we’ve just released a new song, Pulled Fences, our first since the Meadowlands, and another milestone, the first time the four of us were in one room working on new music in exactly 10 years. Trees make quicker progress.

– next Monday, the 19th, we begin recording in earnest for the next album etc. in our basement.

– you can read all about this on our spanking-new website:

…where we’ll be posting mp3’s of songs-in progress (starting with whatever comes out of next week’s recordo kick-off), adding four more blogs to the web’s pile of millions, trying some other crap we’ve got planned…you get the idea.

In fact, we recommend subscribing to the RSS feed to complete your wrens 2.0 experience.

I am *so* not going to get any work done today.