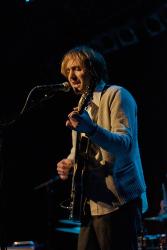 I knew heading into the Neumo's show this past Thursday that Point Juncture, WA (hailing from Portland, OR) wasn't going to be making it up, thanks to the Great Northwest Highway Flood of 2009. Travel plans were suspended, parties were cancelled, people sat in traffic, and bands got delayed. So when my friend and I walked up to the door and checked the lineup, part of me was hoping that things had turned into a two-band night. The old lady, cranky, day-job part; not the photographer-slash-enthusiast, William Miller, new girl in Seattle part. Obviously. And being that new girl in town, I didn't know what was in store for me when I saw Black Daisy staring back at me from the opening spot. I just knew it would be a few hours before Hazelwood Motel headlined, and that I'd been impressed with Animals at Night's resume, and I huffed, and went inside.

Seriously. I was huffing. Huffing! At getting to see a bunch of awesome bands, two that I didn't know, one of the ones I didn't know with a sampling pedigree to make the most gold-medal-toting hipster-Olympics elitists take notice, and of course, Hazelwood Motel. The latter being proven brilliant, through personal experience with both album and live show. As we wound our way through Moe's, I found it odd that door protocol had decided to filter us from bar to side hallway to side-stage entrance, instead of the normal front entry route. And as I walked into the main space of Neumo's, I got surprise number two of the night: curtains.

Yummy, red velvet-y velour-y curtains. And some tables, and chairs! And more curtains! I saw Leigh, and checked in with her on this odd state of affairs — apparently, Neumo's will have what they call "curtain shows" from time to time, to provide space for bands that are expecting a smaller draw to have a higher profile show. Neat, right? I'm all for anything that helps to better spotlight such things, as I'm sure we all are.

Now fully in the huff-free zone, the goodness that is Black Daisy descended upon us, like a beautiful, dirty, nasty little secret. Surprise number three: a band so bad that they're good, a band well-versed in bad being good. They did it bad, and they did it right — kicking up the kitsch a notch with an iPod drummer, and Troy Nelson on lead. The night only got better with the Animals at Night set, a two-man collective of percussion, guitar, keys, samples, and head-bobbing bliss (surprise number four, if you're still counting). And it all left us well-primed for our favorite part-time perfectly-subdued better-than-shoegazers, Hazelwood Motel. Who, by the way, spend the other part of the time blowing our minds with their brilliant lyrics, whip-tight delivery, and full-force big-guitar freakouts. Their set, along with all the others, did our Thursday night right. Which was not a surprise at all.

You can catch Black Daisy and the Animals and Night around town, and don't miss Hazelwood Motel's next show at the Sunset on February 6th. See you at the shows!