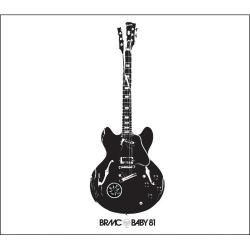 When I was recently driving back from the coast, “Red Eyes & Tears” by Black Rebel Motorcycle Club came up on my iPod and it got me thinking: What sort of career arc has BRMC had since the release of their acclaimed debut BRMC? It prompted me to fumble with my iPod while I sped down Route 12 east of the Bay and find Baby 81, their most recent album, to see if I could answer that query about where BRMC has come in the last six years and four albums. However, even though Baby 81 isn’t a bad album as such, you have to hear it as think that this might be a band stuck in neutral, coasting along on its Jesus & Mary Chain chops hoping that we’ll enjoy another fuzz rock revival for them to jump on.

The album opens on “Took Out a Loan,” which is about as a “by-the-numbers” song that BRMC could ever record. Guitars with a lot of reverb? Check. Thick, heavy drums? Check. Vocals that alternate between whine and growl? Check. If you like BRMC, there is nothing you haven’t heard before here. Honestly, for me at least, the best way to deal with Baby 81 is to try to talk about the songs that vary from that tried-and-true formula for the band and sadly, that list is a little scant. “Weapon of Choice” has a little more life to it, almost coming across as BRMC trying its hand at being the Arctic Monkeys, but it still has too much gloom to it. “All You Do is Talk” is just plain strange, with a string section, drifting vocals and, well, very few guitars. It's almost as if BRMC stumbled into a Rufus Wainwright recording session before the rhythm section finds its way back to the studio (nothing like a band grasping for a power ballad). “Am I Only” has that same “we need a ballad” desperation sense to it. However, you have to give them props for a song like “Window,” a piano-driven and oddly Beatles-esque song which borrows some of the BRMC guitar reverb, yet has a little more personality of its own. Among the formulaic BRMC songs, “666 Conducer” is the most fun with a bit of a White Stripes meets the Jesus & Mary Chain feel to the affair. “Killing the Light” has the band venturing into falsettos and a more restrained beat, but it ends up morphing back into the BRMC we all know.

Baby 81 pretty much gives the average BRMC fan exactly what they would want and expect… and that’s it. Really, it feels like there’s very little meat on the bones of the album, with the band revisiting its old haunts with reckless abandon. Maybe recording four albums in six years and touring relentlessly has taken its toll on the band. They might just need to take a little break and dream it up all over again, otherwise wait it out for the opening slot of the revitalized Jesus & Mary Chain tour.