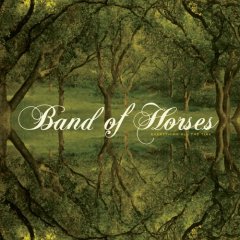 Everything All of the Time

I wish desperately that I could have been at that Sub Pop executive board meeting where the shaggy, beer-gutted intern serving coffee brazenly suggested that the future of indie music was going to be nasal-pitched psych-rock. Oh, they must have had a good laugh. And I'm quite certain they would have kept on laughing when that same intern confidently informed them that members of Seattle's naughtily understated lush-pop band Carissa's Wierd would exemplify the nasal-psych-rock revolution. Sub Pop is still laughing — all the way to the bank.

While not exactly a new sound, Everything All the Time is certainly refreshing. For those who have been enjoying the earthy and grounded elements of say, Iron & Wine, but want more immediacy, Band of Horses delivers in spades while not resigning to self-indulgence. Ben Birdwell and Mat Brooke have certainly been playing music together for awhile, and their comfort level with each other glows on this record, making it feel more like a third or fourth release than a debut.

Contrary to their former band, Mat Brooke takes a second seat in BOH and allows Ben Birdwell to take a shot at playing principle singer/songwriter. And Ben treats us to his instantly familiar brand of guitar and reverb driven headphone music which naturally invites comparisons to a more psychedelic Shins, or a more melodic My Morning Jacket. But I hear other influences a little closer to home such as Built to Spill, Sunny Day Real Estate, or even Damien Jurado on tracks such as the epic and soaring "Funeral" and the laid-back "St. Augustine." Tracks like "The Great Salt Lake" hint at even earlier inspirations like Weezer, Mercury Rev, or perhaps even early REM.

Overall, Everything All the Time turned out to be a pleasant surprise considering the lo-fi folksy demos that they were circulating last year. While certainly much of this "big sound" can be attributed to production wiz Phil Ek, who seems to have a knack of bringing out the hair-rocker in even the most melancholic introvert, I am glad to see Ben and Mat taking a chance — particularly a chance which works so well.